Down On The Street - Linyi China Edition 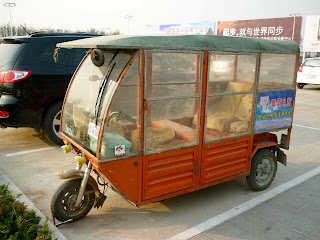 thieves beware, that front wheel is locked!
Arguably far more motorbike than proper "car", I'm told that while these three-wheelers are generally used for around-town fares, sometimes they're seen far out in the country. 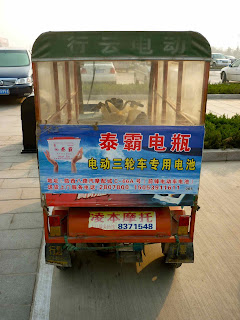 Looks like it'd be fun to hoon around in - until you encountered other traffic or a strong crosswind. And hey, speaking of out-in-the-country, I snapped the following (poor) pic quite far from anything of any substance. 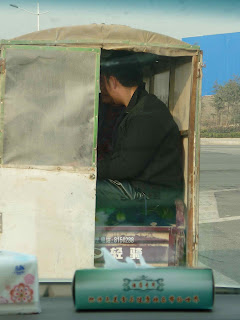 A happy passenger, sitting sideways. Ignore the tissue on our car's dashboard.
Posted by Green Laker at 5:40 AM

Email ThisBlogThis!Share to TwitterShare to FacebookShare to Pinterest
Labels: cars, China, Down on the Street, motorcycle, small cab, taxi