Down On The Street - Taipei Edition

Walking the streets of Taipei back in March, I found yet another classic Mini on the island of Formosa. This one looks pretty good, but is boxed in by scooters, making it hard to get a clean shot. 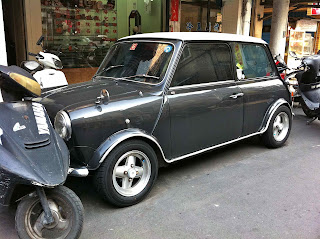 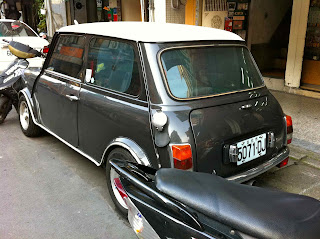 While not a rare site worldwide, I still reach for the camera phone when I spot one in the wild. If only BMC had continued to import these fine machines to the States beyond the mid-60s, they might be a more common site here in the US.
Posted by Green Laker at 5:55 AM 2 comments:

Email ThisBlogThis!Share to TwitterShare to FacebookShare to Pinterest
Labels: cars, Down on the Street, Mini, Taipei, Taiwan

Black As Midnight On A Moonless Night

While out for a nice road ride with my friend Graham, this sparkly bass boat blue buggy caught my eye, sitting for sale in Vista. 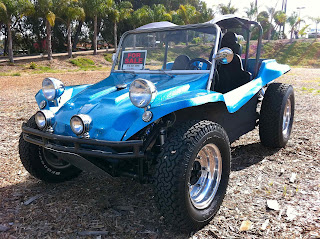 A fantastic fiberglass fabrication, possibly a classic Manx? Even if it isn't, it's still a super-cool ride. 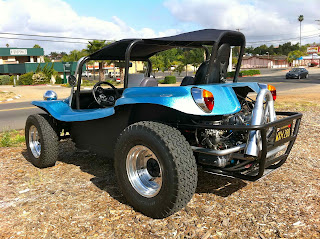 No specs were listed for the motor, but it's a dual-port of unknown displacement and looks to be quite the spendy unit. 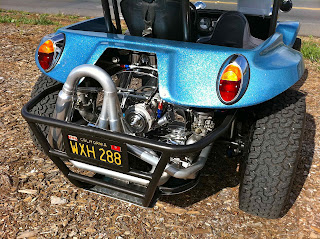 That black plate indicates that it's based on a pre-1969 Type 1 (aka Beetle). No surprise. 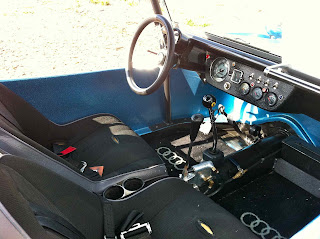 And I like how the dash incorporates the stock VW speedo and fuel gauge. Audi mats and rear brake lever knob too.

Email ThisBlogThis!Share to TwitterShare to FacebookShare to Pinterest
Labels: cars, Down on the Street, dune buggy, VW

My friend Graham and I did a nice road ride this morning, finding ourselves on some lightly-traveled roads northeast of San Marcos. A seemingly picturesque abandoned avocado grove forced me to pull the phone out for a few quick pics. Since we weren't out during the "golden hour", I compensated by using the overused Hipstamatic app. Results below... 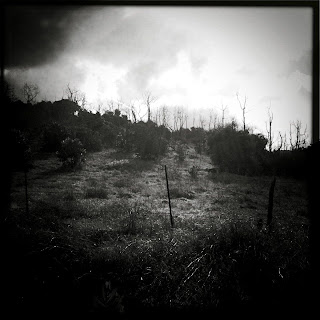 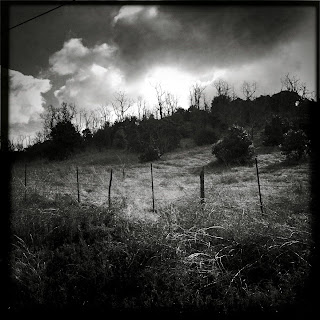 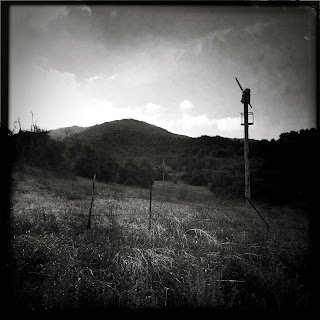 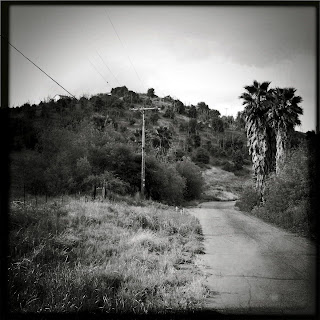 At least the clouds helped make the sky more dramatic. Coupled with the Hipstamatic, it almost gives the illusion that I have a shred of talent with the camera. Someday...
Posted by Green Laker at 12:34 PM 2 comments:

Favorite Songs Of All Time: Night Of Chill Blue by The Chills

As previously stated on this shabby blog, the music of Dunedin, New Zealand's Flying Nun Records has been a very big part of my life for virtually all of my adult life. The Chills were my gateway drug so-to-speak into the wonderfully unique, chiming pop from the island nation.

A great description of The Chills is from Trouser Press (which, in print form, was another great musical influence for me):

Perhaps the most widely known and beloved combo of New Zealand's '80s indie-pop boom, Dunedin's Chills — led by singer/writer/guitarist Martin Phillipps — made clean, understated, catchy music whose consistent taste and subtlety conspired to keep the band from having real commercial success in this country. At its best, the Chills' work boasted an undercurrent of dark uneasiness that clearly marked it as a vehicle for personal expression rather than mere genre exercise. Guitars may twinkle like harps and jangle over angelically whispery vocals, but the love songs are never gooey. Gooey bands do not write lines like "Oh god this white ward stinks, sterilized stench of sticky death, sniveling relatives at the feet of another moist corpse, but that corpse is Jayne and Jayne can't die" (from Brave Words' "16 Heart-throbs"). Soppy sentimentalists aren't honest enough to admit "I'd like to say how I love you but it's all been said in other songs" as Phillipps does on the same album's "Night of Chill Blue."

One of the high points in the Flying Nun canon is "Night Of Chill Blue" by aforementioned The Chills from their production flawed-but-still-great 1987 "Brave Words" LP.

Some of the tracks from Brave Words have been remastered, with the muddy production cleaned up. Hopefully Martin can get around to taking care of the rest of the tracks, including "Night Of Chill Blue" one of these years.
Posted by Green Laker at 8:44 AM 1 comment:

Email ThisBlogThis!Share to TwitterShare to FacebookShare to Pinterest
Labels: favorite songs of all time, flying nun, music, The Chills

Visit the Record Store Day website to find a participating retailer.
Posted by Green Laker at 6:23 AM 2 comments:

Untitled from Bon Iver on Vimeo.

Just about double the time that the Subaru Impreza WRX that I used to own would do. A little vintage Motorweek for you:

Probably one of the dullest car-related shows of all-time, they even chose to review the dullest EuroVan variant - the GLS.
Posted by Green Laker at 5:50 PM 1 comment:

Sorry about the lack of posts, feeling very unmotivated and uninspired to pass along my insipid comments and crappy photos the past few months.

I have been on two wheels a fair amount though - here are the ride stats for the first quarter of 2011: 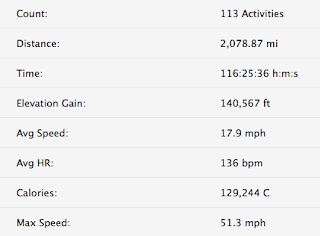 Not too bad for "winter" - if you're so inclined to call it that.
Posted by Green Laker at 6:46 PM 4 comments: