Another day, another Bay-Window "T2" VW Bus. There are an inordinate amount of these still roaming the streets of Northern San Diego County in many shades of paint and primer (like this one, this one and this one which all live in our small neighborhood). 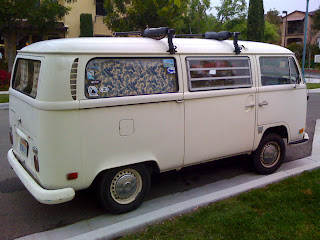 This one's still in good shape, a "survivor" with no visible rust and likely still coated in the paint that it left VW's Hanover factory with 39 years ago. 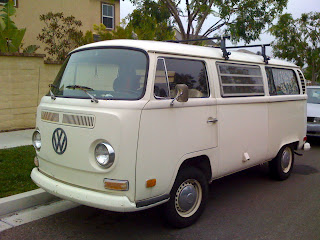 This one's a 1971 "hardtop" Westfalia camper. '71s are the best of the Bay Windows as they were the last year with the upright dual-port engine yet the first year with the much-needed front disc brakes.

Look closely and you'll see the BMW 2002 that was featured last October sitting pretty across the street. 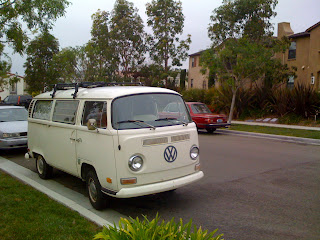 I roll past both the Bus and the Beemer virtually every day on my commute to work. I'm pretty sure both Teutonic touring machines share an owner as they're always generally parked within spitting distance of each other.

Allie and I owned a similar ivory Bay Window camper back when we lived in Boulder, ours was a 1968 pop top. 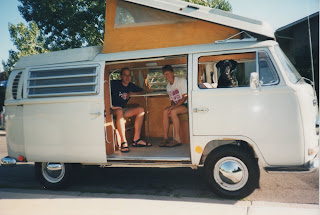 Purchased from an Antarctic researcher who was about to be deployed for a six month stint, it was the one of the rare Busses in our price range that was not plastered with horrible Grateful Dead (or even-worse Phish) decals. 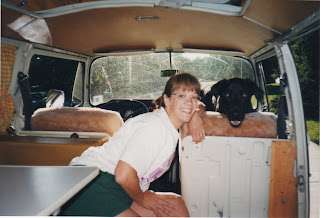 We named our bus Sally after the previous owner. During our short stint of ownership, we made some minor improvements - upgrading the electrical system from a generator to an alternator, new ball joints up front and sweet Michelin Agilis light truck tires all around. Allie also sewed some new curtains, seen on the left side of the image above. A few Saturdays were spent hitting Denver-area junkyards looking for some of the missing trim pieces both inside and out, the largest being the rear wardrobe cabinet. Overall we were able to get it back into pretty good shape for very little cash. We could never find an original-style icebox though.

One of my favorite features of the van was the original owner's manual, still sitting in the glovebox, looking cool in a mid-century European kind of way and touting some impressive specifications - like peak power output of 57 HP from the diminutive 1600cc single-port engine that would theoretically propell the box to a very noisy 0-60 time of 29 seconds. 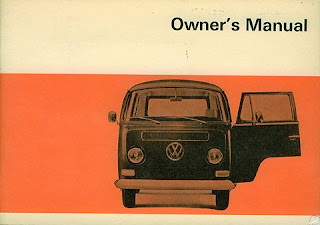 We ended up selling it as Allie was pregnant and didn't feel that it would be a very suitable baby-mobile. I ended up selling it to some dirtbag hippie kid who's mom mailed me a check from her home in New Hampshire and replaced it with a '91 SAAB 900s that I bought from my boss.
Posted by Green Laker at 6:50 PM

Email ThisBlogThis!Share to TwitterShare to FacebookShare to Pinterest
Labels: Down on the Street, VW, VW Bus