And Now A Word From Our Sponsors 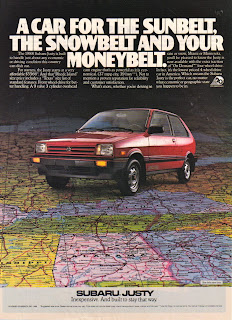 As I mentioned in a post a week and a half ago, my first car was an '88 Justy DL shitbox. However, only front wheel drive for me. But that certainly didn't stop me from trying (horribly) to emulate the Group B rally stars of the day once the snow flakes fell. Or when I would drive out to the gravel farm roads a half an hour or so south of my parent's south suburban Chicago home.

I'm not sure what magazine this was ripped from, but it appears to be an especially-lame edition of Bicycling Magazine where they ran a story about bicycle-related vanity license plates. 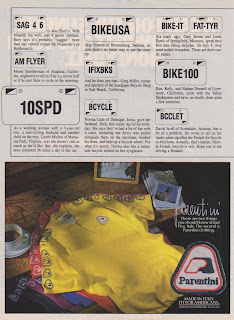 I bet they also had an eyeglass mirror shootout (comparison test).
Posted by Green Laker at 8:00 PM

As gasoline is burned in an outboard motor, the temperature quickly rises in and around the piston visit this page