Down on the Street - Taipei Edition 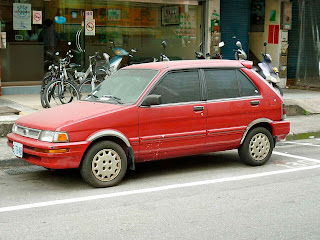 My first car was one of these diminutive shitboxes. They're VERY rare cars in the US now, disposable in nature and very prone to rust. 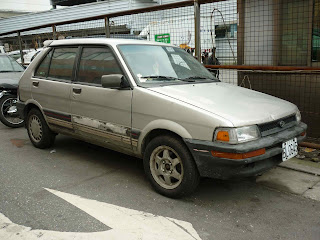 These two were parked within a block of each other. I've probably only seen a half a dozen of these in the last 15 years. 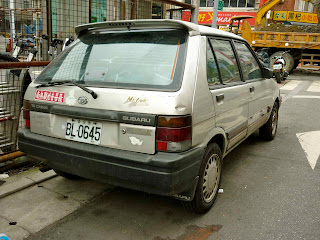 These are both 1990-'94 models with slightly rounded styling. The silver one is even "Super Deluxe"! 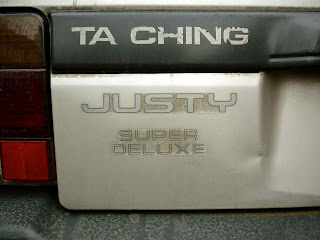 I wonder if the Super Deluxe moniker means that it has an accessory cupholder. 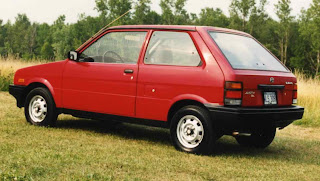 The luxurious and sporty interior: 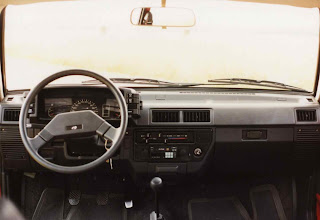 also shown, the first of many nice stereos to be pried from the dashboard by thieves
The stomping 66 HP 3 cylinder, 9 valve engine, which once propelled me, assisted by both gravity and a strong tailwind, to an indicated 95 MPH: 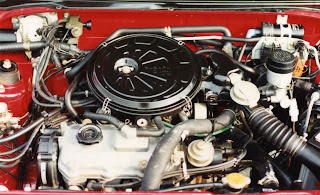 not-so fun fact: The Justy was the last car sold in the US with a carburetor 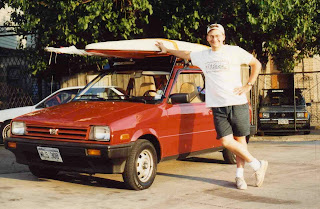 Good friend Joe and the Justy, ready to head to Green Lake with a crappy sailboat on the roof
After four and a half years and 113,000 miles, the car had had enough. Despite my best efforts, Midwestern road salt had started taking it's toll, the cheap vinyl seats were splitting and it had an seemingly-unfixable electrical gremlin that made it sputter. I parted ways and traded it in on a then three year-old SAAB 900.
Posted by Green Laker at 5:45 AM

Email ThisBlogThis!Share to TwitterShare to FacebookShare to Pinterest
Labels: Down on the Street, Justy, Subaru, Taipei

Boy I really parked my car close to that fence...

So that's YOUR VW in the back Joe? Nice.