Since my calves and feet were still aching after yesterday's marathon-like seven hours of on-foot urban exploration, I decided to take it easy today and didn't plan on doing as much actual walking.

Hitting the streets with a new friend Phil, a Vancouver B.C.-based bike industry vet, we first set out for coffee at "Charbucks" (so-called by some due to their over-roasting of the beans), waiting for the 10:00 hour to hit so that we could check out Taipei's electronics district.

We arrived after a short cab ride, setting us back a whopping $110 NT (a little over $3). First explored was an area covered by a large tent. Turns out, it was a small boutique farmer's market. Honey was sampled... 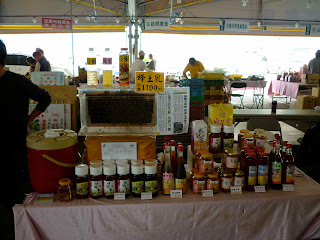 ...and ginseng was in ample supply: 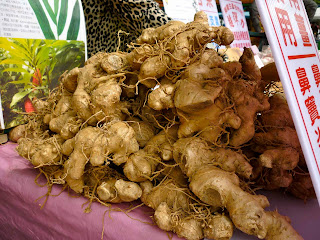 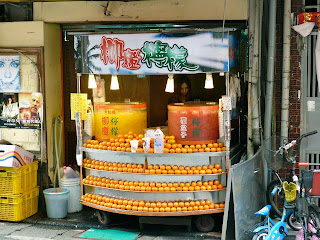 Done there, we headed across the street to check out the vendor's wares. 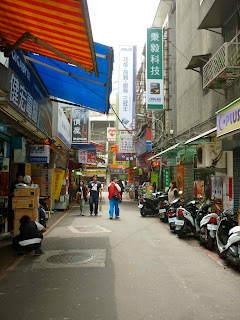 Taiwan is a huge player in the personal computer market, and many well-known brands are prominently advertised on large neon billboards throughout Taipei. The area we visited seemingly catered to all, from those looking for an off-the-shelf unit to those who were in constructing their own machines. Being the nerds we are, we focused on the shops that specialized in the latter. 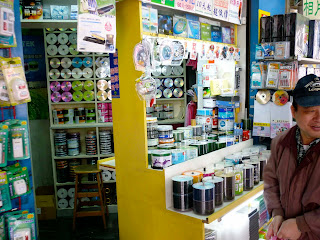 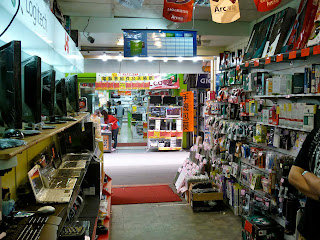 Virtually every part needed to build your own box were for sale, from the boxes themselves... 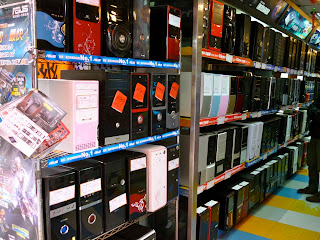 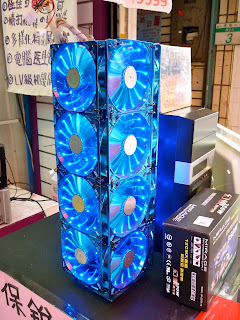 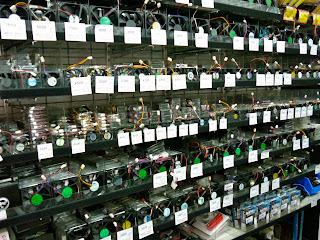 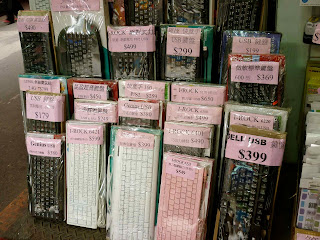 ...and the like. My friend Phil picked up a 12v fan, housing and switch for his VW T3 Syncro project. He'll use it to help evacuate warm air from the vehicle when he's out camping. The last shop we hit was like a Radio Shack for VERY hard-core electronics hobbyists.

Thousands of bins of self-serve things... 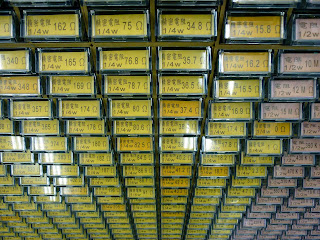 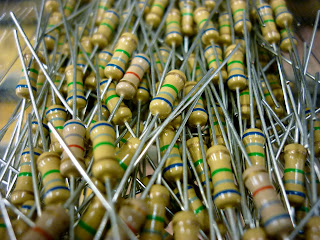 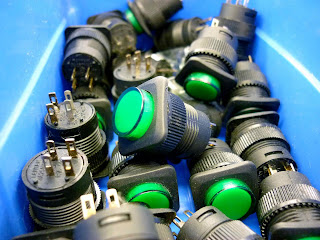 ...and the like. I was then wishing I had projects that could utilize the offerings, along with the know-how on how to use them. Then I saw the light(s). 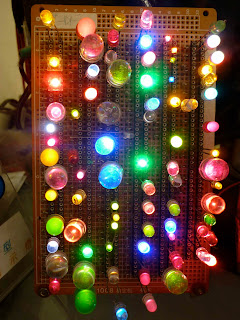 Or, more appropriately, the banks of LEDs of every color and application, including automotive. Phil bought brake and turn-signal LEDs for his VW van project while I selected a few for interior lighting. 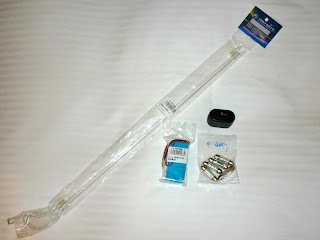 The long bag has an electroluminescent LED, 40cm long. Coupled with the switch and blue 12v-whatever the LED requires transformer, it will make for a nice, minimal light for the under-seat cargo area of my EuroVan. The small bag of five LEDs will go into the van's interior dome and map lights. With LEDs drawing much less power than their incandescent counterparts, this upgrade will be better for camping as we will be able to leave the cabin lights on longer in the evening without fear of draining the battery. Total cost for the goodies? About $15. Seeing that the going rate for the LEDs in the US is about $13 each, I should probably go back and buy to list on eBay.

After we had our fill, we jumped in a cab to head over to Taipei 101. I had emailed Allie a pic of a funny shirt I had seen the prior day and she let me know that she wanted it. Lunch eaten and souvenirs bought, we hopped in the world's most toxic taxi, with it's interior completely blackened with nicotine. Testing the taxi's blown suspension and bump stop limits while cruising Taipei's relatively good streets we headed back to the hotel as Phil needed to grab his stuff for his evening flight back home.

I dumped the day's haul of t-shirts and LEDs and headed out onto the streets for another hour or so of sightseeing. Ooh, flags. What is this? 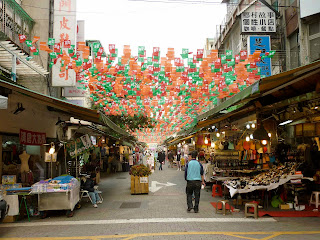 Another street market. This one very quiet though, which was fine by me. 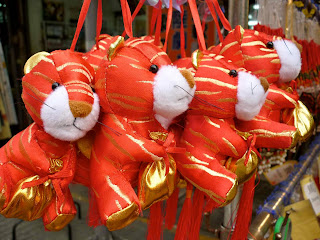 year of the tiger! 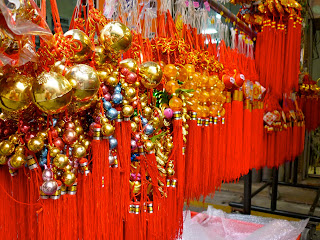 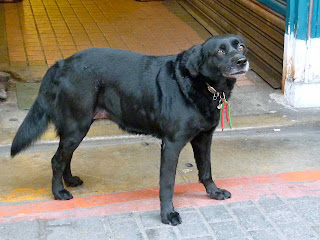 getting barked at by yet another Taipei doggie
By now it was late afternoon and I was surprised that the heavy fog hadn't lifted. I was also surprised that the day never feel humid, even if it looked humid. Turns out the Chinese sandstorm had hit the island, covering it in a thick yellow cloud. 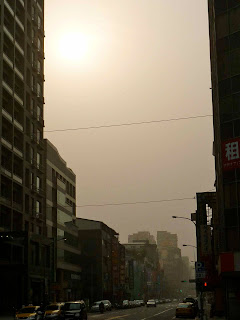 By now I was tired and hankering for a Taiwan Beer, so I snapped a few more scenes on the street en-route back to the hotel. 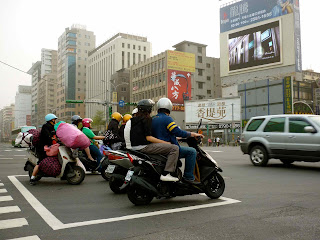 A couple of stray cats were spied in a back alley. 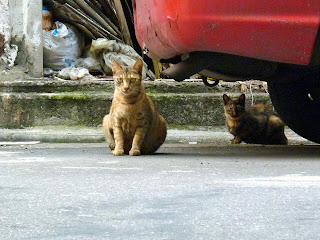 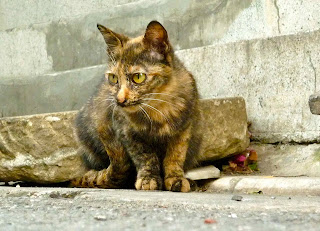 Almost back to my Taipei home. 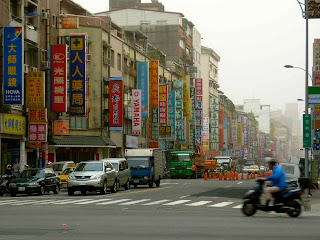 And with that, I had dinner in the hotel's restaurant. Since I had consumed three Western meals in a row, I figured I might as well eat native with a chicken fried rice dish and a tall Taiwan Beer. Tomorrow I'm off to Taichung for the day, via Taiwan's fantastic high-speed rail.
Posted by Green Laker at 3:03 AM