Most SoCal trails have zero canopy, not so with Tunnels, part of the McGonigle Canyon network. 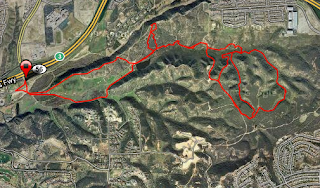 I spent Friday morning riding the area with my friend (and local boy) Derek. With nearly-perfect tacky dirt, temps in the upper-60s, abundant sunshine and a dialed-in Pivot Mach 5 shod with superb new Continental Rubber Queen tubeless tires, It'd be hard for me to say I had less than a fantastic time.

Derek hooked up his GoPro Hero camera for a few of the sections. The results (for some reason compressed and grainy on YouTube) are below.

The middle section descent was MUCH steeper than it appears in the video, in excess of 25% on a mud-covered, north-facing hill. Plus with memories of my recent road crash still fresh on my brain, I was a little more gun shy (and sucky) than usual. With Derek getting far behind the saddle, it became the CrotchCam 3000™.

Looking forward to heading on down there again in the near future.
Posted by Green Laker at 8:09 PM