This afternoon I finally got around to giving The Plastic Bike a detailed inspection, following the little "off-bike excursion" I had on the way into work on Monday.

I knew that there was some minor damage: shredded bar tape on the left side, a scuffed pedal, saddle and shifter too. Another casualty was the "composite" (fancy plastic?) Mavic rear skewer, which was barely holding together.

Removing the rear wheel revealed that a chunk of carbon was missing from the chainstay yoke: 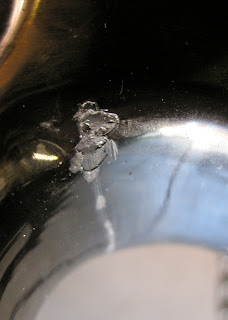 Which also started a crack: 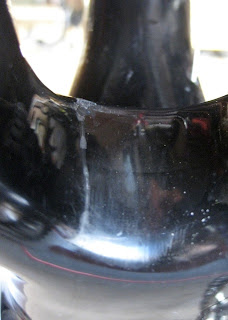 (as seen from the bottom)
A similar failure, but much larger and deeper wound occurred up top at the seatstay yoke: 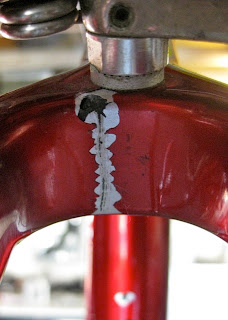 Prior to tearing the bike down, I threw it on the scale one last time. 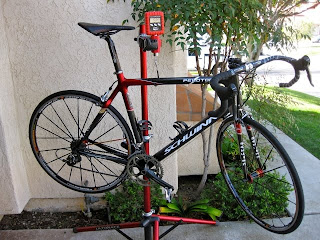 Not bad - especially for a Schwinn: 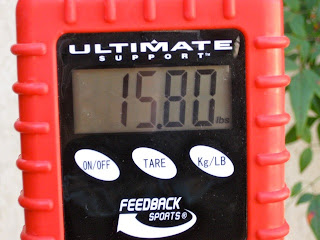 It had been a bit lighter with the OEM-spec'd wheels, but those were sold a couple of months ago as I lost confidence in the wheel's carbon fiber spokes.

I was a little sad to tear this bike down, it's been a reliable, fast and comfortable ride over the last few years. I just wish the frame could heal itself as my leg has. Now it's time to decide what I want as a replacement. More lightweight carbon fiber? Sturdy, timeless steel? Lust-worthy, lifetime (and super-spendy) titanium? I just know that this was my last Schwinn as the brand has abandoned the performance road segment. Until I figure it out, I'll be hitting the roads (figuratively I hope) on the CX bike.
Posted by Green Laker at 3:05 PM

Calfee has done some work for us and they do a great job, but a sweet steel Waterford or sweet Ti Merlin would be nice also.