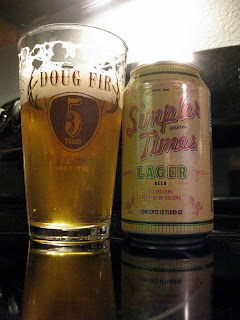 But what did I expect for $2.99 for the six pack from Trader Joe's? Well, I expected a halfway-decent "lawnmower beer", the kind that's watery and domestic tasting, a little bland but one that went down easily. Most varieties of their "two-buck Chuck" ain't bad. Heck, it's even brewed in Wisconsin. Instead this swill has a rotting corn flavor and a thin foam head that lasts all of five minutes. I've tried twice to drink one of these, both have ended up down the drain after choking down a few sips. Best use for this swill? Cooking, like marinating grilled brats.
Posted by Green Laker at 8:13 PM

Email ThisBlogThis!Share to TwitterShare to FacebookShare to Pinterest
Labels: beer, Simpler Times, swill, Trader Joe's, who peed in my beer?