Mountain Biking with the Bike Guys

I was happy to hit the dirt for the first time in nearly two months this morning. I met Derek from Bike Magazine at 6:45 here in Carlsbad and headed north up into SW Riverside County for a great ride in the Cleveland National Forest on the San Juan Trail.

Specifically, we hit the Chiquito Spring trail, starting at 3900' and ending at about 2000'. 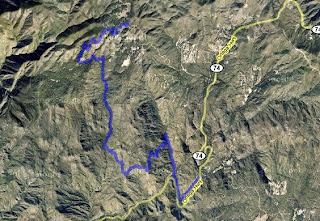 The trail is pretty rugged - well, rugged for a mountain biker who has spent more time on Midwest trails than western trails in the past few years - but was almost entirely rideable on my 5.7" travel all-mountain bike. However, there were plenty of sections of loose and sandy dirt, leaves covering the trail and short, steep drop-offs in very narrow sections of trail. It's so far removed from WI's Kettle Moraine network but fun in a completely different way.

Some of you purists may (rightfully) scorn the one-way nature of the ride, shuttling to the top and riding to the base, but this was done due to time constraints. A few of us had to be back home relatively early, so our ride was cut short by a few miles.

Overall we were able to get in just under nine miles, but even though it was short, it was still a good workout due to several technical climbs. 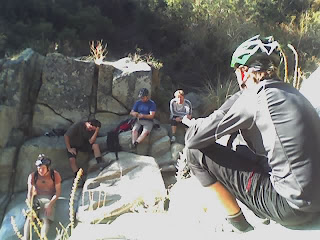 Crappy cell phone pic of us enjoying the view at the (dry) waterfall
Derek and I were joined by several other Bike editors, this was the first time I had ridden with them on their (and now my) home turf. Looking forward to doing it again in the near future.
Posted by Green Laker at 7:09 PM