Just a mini field trip this weekend. Even though it's 82 and sunny here, the calendar tells me that Halloween is approaching. We're certainly getting used to this Eterna-summer. 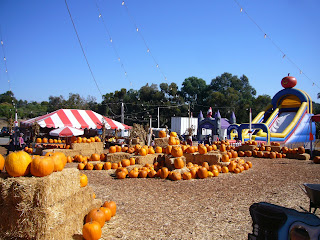 Stu Miller's is a small dirt lot in east Encinitas, filled with overpriced pumpkins, a petting zoo and some kiddie rides. 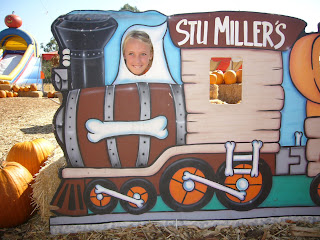 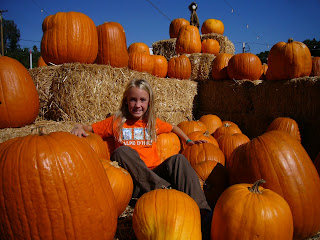 Can you find Celeste in the pic? She (rightfully) insisted on wearing orange.
The pumpkins she's sitting around ran price from $10 - $18. Sure they were some nice squash, but not *that* nice. We picked up a couple at Von's a bit later.

The highlight was the petting zoo. Not just a bunch of crazy goats (there were two of 'em), but a bunch of hens, roosters and some bunnies to pick up and manhandle (kidhandle?). Here goes: 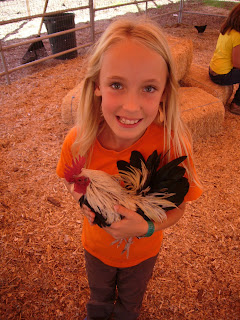 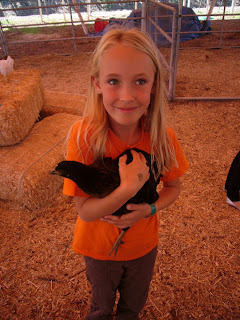 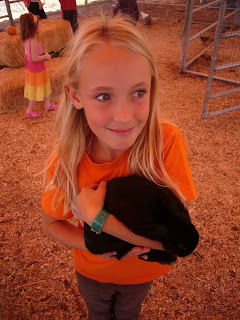 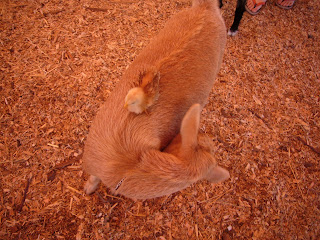 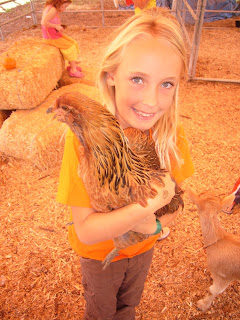 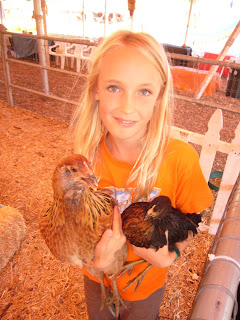 Predictably she had a hard time leaving the critters. Would she ever make a great farm girl. She was finally able to snatch one of the reclusive bunnies to hold, but that bunny didn't like the way Celeste was holding her and ended up laying some decent scratches on Celeste's forearms.

Next stop, bungee-trampoline. Just like in It's The Great Pumpkin, Charlie Brown (1966), no trip to a pumpkin patch is complete without a turn at the bungee cord/migrant worker-equipped trampolines.

Once she was all strapped into a sturdy harness, Celeste was lifted about 7' above the trampoline. 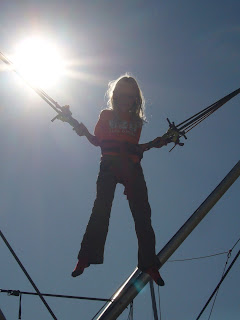 way to go, shooting into the sun and all...
Next the Mexican guy bounced up and grabbed her by the ankles and pulled her down. Once released she soared up about 20'.

While I was expecting some of her "fun screams" (like when we visited Point Loma and the waves crashed in), she was far more reserved due to being nervous. Here's the vid...

At the end she accidentally did a flip at the upper end of the bungee. We lowered a scared kid down and headed home. 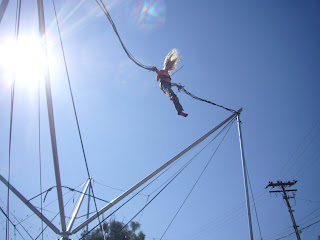 weeeee!
While it was fun, we prefer Schuster's Playtime Farm in Deerfiled, WI.
Posted by Green Laker at 3:46 PM