**WARNING - looong post with lots of pix from Frank Lloyd Wright's Taliesin West ahead...**
Since we were camping - and since Celeste and I slept in a tent w/o a darkening rain fly, we were up with the first light and got all of our stuff packed back into/on the van pretty quickly. I was excited to get on the road as today's agenda included a stop at one of Frank Lloyd Wright's masterworks - Taliesin West in Scottsdale. 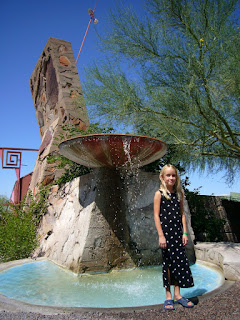 Taliesin West was his winter home and school in the desert from 1937 until his death in 1959. Wright first experienced the Arizona desert when he was commissioned to design a resort hotel. After Wright contracted pneumonia in Wisconsin, his wife Olgivanna urged him to recuperate in Arizona. He became so attached to the Phoenix area that he decided to build a home in Arizona.

C'mon, join the tour and send the $32 you would have spent to me. I accept PayPal.

The work was all done by FLlW's students/apprentices/slaves, using experimental techniques and inexpensive and readily found materials. Materials included redwood that was bought on-sale (some of which has been since replaced with steel), the then-new material concrete (the Kiva at Taliesin West has the first-ever pre-stressed concrete) and stones found on-site "one man, two man, three man, five man", etc - all referring to how many of his students it would take to move. 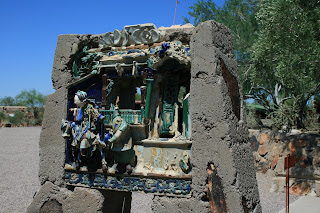 An example of some of the oriental art found on the premises. Wright purchased these damaged from a SF department store and had some of his apprentices put them back together. Initially with Elmer's Glue (bad choice), then concrete. When some of the parts fell off because of the Elmer's Glue, pack rats picked them up and carried them away. 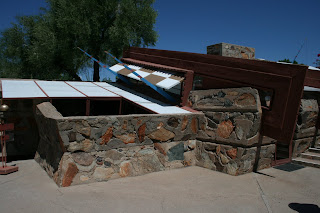 Exterior of the conference room, originally the white roof was simply canvas sheets stretched over redwood frames. There are translucent acrylic panels now in place to better preserve the structure. 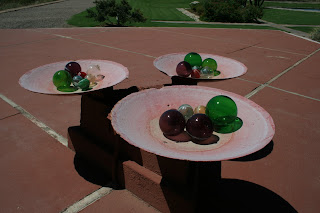 Net floats as decoration. I need to get some of these. 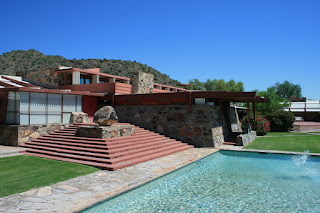 As the father of organic architecture, Wright was always known for building in harmony with nature. So why the heck did he put a small pool in the desert? For a few reasons. The vault, the first permanent structure built on the grounds is on the left of the image. The pool acted as a fire break for the structure, especially for the vault where all of the valuable work was stored every night. Second, the kitchen (pictured center in the image, with chimney) was close. The kitchen is a very probable location for a fire to break out, so a source of water was close at hand. Buckets for a bucket brigade were also kept in the kitchen as there was no fire station or hydrant nearby when built. Third, the water acted as a swamp cooler. Warm desert air blows across the water, cooling and gaining moisture prior to going into the building. And finally, the pool and grass, also a fire break, was for the children of the students to play in. 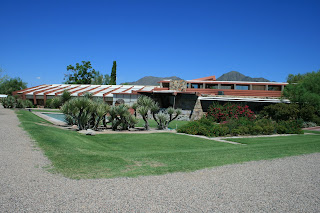 Another view of the main living quarters. The drafting room is on the left, with natural light filtered by the canvas screened roof, kitchen and dining in the middle and Wright's living quarters on the right. Originally this was the front of the home, later was re-oriented after power lines went up, disturbing Wright's view. Wright even complained to President F.D. Roosevelt about the power lines to no avail.

The Garden Room was next (image from Wikipedia, my room shot came out too dark). What was most amazing to me was that we were able to sit on any furniture. Wright and the FLlW Foundation feelt that the furniture is to be used. Much different from the Robie House tour we went on last winter where we could take no photos nor could we really touch anything. 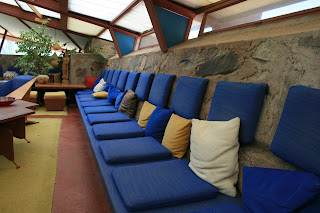 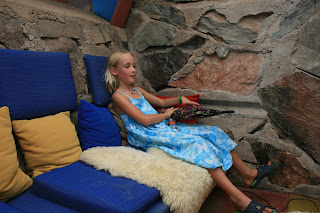 Celeste enjoyed the couches. Even though it was over 100 degrees outside and the aging AC system was taxed, it was not uncomfortable inside. These structures were designed to be used in the winter, come spring the canvas roofs would be removed and all of the furniture put into the vault. This was a campsite according to Wright. 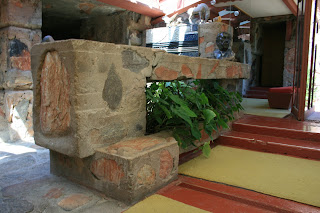 Another shot in the Garden Room. 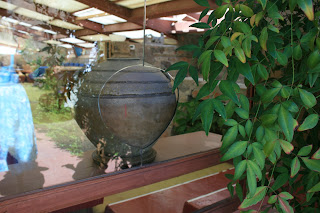 A preservationist's nightmare, this ancient Chinese pottery would not fit on the shelf, so FLLW had the window cut. It's been exposed to the elements for decades. 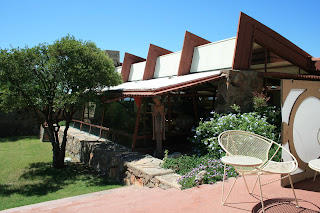 Exterior of the Garden Room, the statue ("Biltmore Sprite") under the eave was from Chicago's Midway Gardens (demolished 1929) was painted by his children as they wanted her to have clothes. 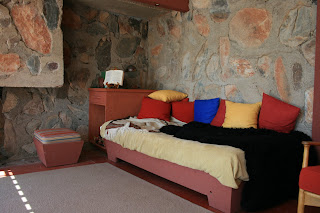 Olgivanna Wright's office. Allie and I were impressed with the stories of how Olgivanna was able to put up a good fight with the highly egotistical FLlW. Her office here overlooked the garden where the children would play. Note that the oriental art is placed somewhat randomly around her desk. 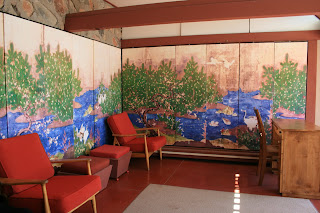 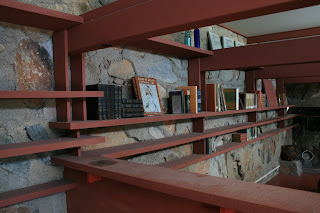 Mr. Wright's office and bedroom. The twin beds are divided by the shelf in the foreground. The right side was for his catnaps, it was okay to wake him from this side. The left side was for his overnight sleep. But like most geniuses, he didn't sleep much, only a few hours per night. He might wake up with a new idea, grab his students/apprentices and have them work on drafts in the middle of the night. Note how the bookshelf extends into the fireplace.

FLLW was so far ahead material-wise, check out the stainless steel bathroom he built in the 1940s. 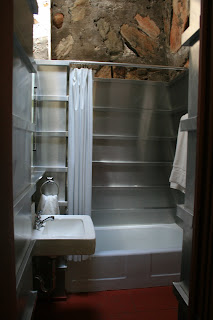 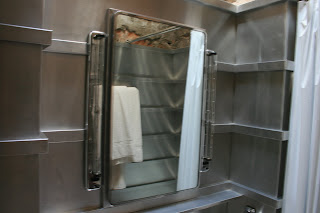 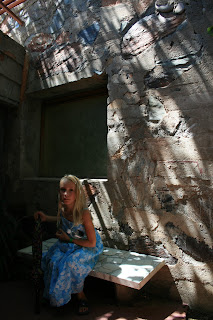 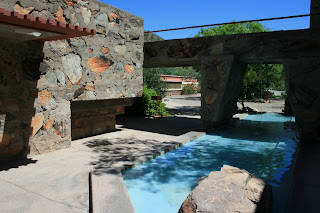 Fountain outside of the kiva. 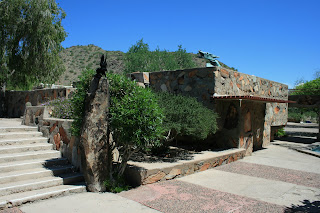 Kiva exterior - I wish I had my tripod with me, the indirect lighting designed by Wright was very cool but it was too dark to shoot by hand-holding the camera. 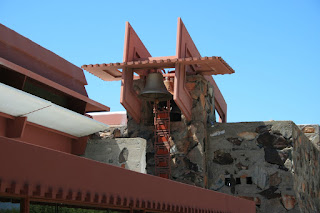 Dinner bell, reclaimed from a church that was being demolished. FLlW hated seeing church bells being melted down during the war effort. He was able to convince the government not to recycle religious artifacts into munitions. 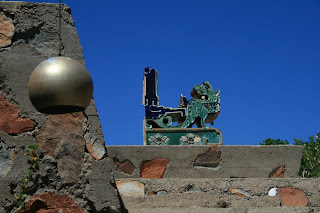 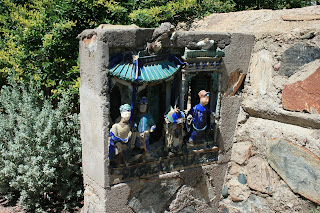 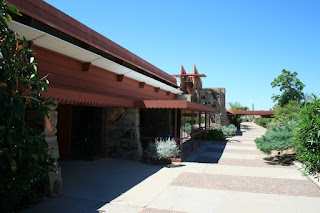 The dining room is the glassed-in area in the center of the image. Neither that nor the kitchen are part of the tour since this is an operating university (about 25 students, supposedly it's the smallest accredited university in the world). As a student at Taliesin, winters are spent in Scottsdale while summers are at Taliesin in Spring Green, WI. The first winter in Scottsdale is spent in a tent on-site. In later years, students are given a slab of concrete and a $1000 budget to build a home that they will be living in for the next two years. Towards the end of their stay, their mentor will live in the structure for a month to grade the student on the livability of the shelter. Most students receive some donated materials, technologies that are new on the market. A separate tour covers these structures in the winter months. 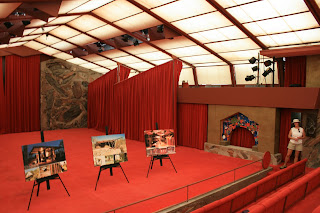 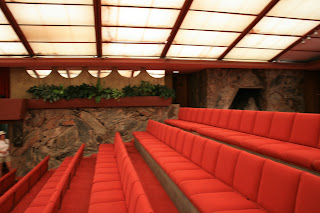 Music pavilion and seating. The front of the stage floor can be removed for the orchestra pit. Also, the backdrops can be set at different intervals to allow for more intimate shows.

The Cabaret Theater was probably my favorite room in the compound. Even though it's concrete and rock, it's acoustically perfect (pretty amazing in the days before CAD). There is no echo and the sound carries well from the stage. Our guide turned her back on us and spoke in a normal voice. Even though we were in one of the back rows, we could hear her clearly. The sound is naturally amplified by the stage being wood over a 6' deep (I think) concrete pit. Essentially the performers are on an enormous bass cabinet. 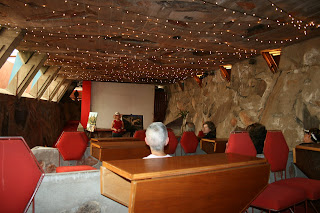 Another detail that is somewhat visible here is the angled cant of the rows of seats. Mr. Wright liked to cross his legs and have his arm outstretched when watching a show. Angling the rows of seats (concrete with cushions) a few degrees allows the audience to sit comfortably.

When the room was built, there was no space for a piano. Wright had his apprentices blast a hole to the right of the stage in which to place it.

Lighting is another area where FLlW broke new ground. The theater includes the first-ever use of aisle lighting (sadly not pictured). Wright did not believe in patenting his ideas, he wanted others to use his inventions. Pictured above is some of the theater's celing sconces. The Christmas lights were hung for a holiday production and stayed up as Olgivanna liked how they reminded her of the night sky.

Detail of columns supporting roof of Cabaret Theater.
And finally, I'm too tall for most Frank Lloyd Wright buildings. He considered anyone over 6' tall to be a "waste of material". Couple that with his buildings intentionally uncomfortable entryways (get out of the entry and into the structure), and I had to duck a number of times on the tour. 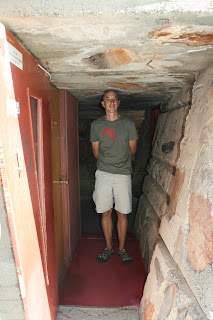 We were back on the road after lunch, with the hopes of camping one more night somewhere in California. However, we weren't taking into account the temperature. When pulling out of Taliesin, the van was showing 109 degrees and it stayed hot the remainder of the day, registering 114 for an hour or so in western Arizona. 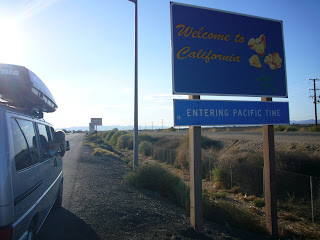 Not looking to have an uncomfortable night sweating out in the desert, we decided to push on to Indio/Palm Desert/Palm Springs for the night. Plus, the only campgrounds we could find were "off road recreation areas." I'm not too fond of dune buggies strafing our campsite at 3 AM. 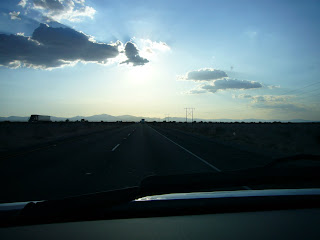 Somewhere out on I-10 (or "the ten" as the locals call it), eastern California.
Staying the night in Palm Desert would also give us a relatively easy last day, only a little more than a two hour drive to our new home.