Time Capsule - On The Cheap

I've been wanting to establish my own WiFi network over the past year or so, but never really had the impetus to spend the cash on a router - especially when one of my neighbors (not sure who) has been giving away broadband. With the new iMac, I was leaning on getting one of Apple's Time Capsules - an all-in-one hard drive and router. But with reports of these pricey bits dying prematurely, I searched for another option.

A coworker has had an Apple Airport Extreme sitting unused in his office for over six months - he no longer needed it at home but never got around to firing it up before our IT dept put in a WiFi network.

Armed with a long-term loan of said Airport, a trip to Fry's was in order. $80 later I had all I needed for my kit. Airport + 1TB hard drive + instructions I found on the web. 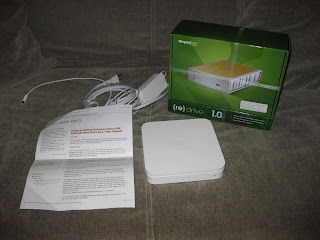 Granted getting this fired up wasn't the hardest thing in the world, but it was more involved than the plug-and-play nature of Apple's Time Capsule.

Everything seems to be working fine for now, and I managed to save $220 over the price of the Apple device.
Posted by Green Laker at 9:48 PM