I was very curious to try authentic Chinese food. I love the westernized version and was hoping to find similar dishes on the island of Formosa (Taiwan).

For the most part the meals were pretty good. I had a number of good fried noodle dishes, and my chopstick skills definitely improved after a week. 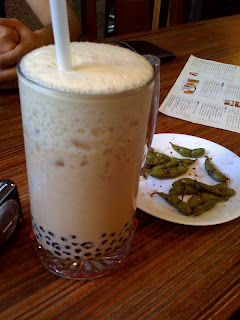 Bubble Tea (aka Boba Tea) was a cool find. Even though it's available in the States, I had never heard of it. The pearl milk tea pictured above (in mega-gulp size) has tea, milk, ice sugar and brown balls of semi-sweet tapioca settled at the bottom of the glass. You're given a wide-gauge straw and suck these balls of chewy goodness in with every gulp. A drink you can chew. Or swallow - some went right on down the pipe.

There was one meal that disappointed me - hot pots or Chinese fondue. 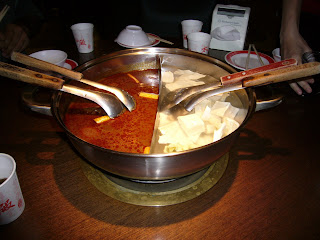 We went to a hip hot pot restaurant one night for dinner. While the concept is cool - everyone sits around a large pot sitting on a gas burner, the food wasn't to my tastes. The soups pictured above were done as a split as one of us was a vegetarian while I rarely eat meat (and don't eat beef or pork). The red soup has a duck blood base and had all sorts of organ bits in it while the white side was the veggie side - it tasted like water and cabbage, no flavor.

You order up plates of veggies and or meat/seafood to cook (like a fondue) and sit around and converse while your food is cooked. Josh (the vegetarian) and I added tofu, corn on the cob, broccoli and some mystery veggies to our soup. Still it had virtually no flavor. And sadly they didn't have any hot sauce. A bottle of sriracha would have gone a long way. Or at least some salt. Still we were troopers and chowed down.

Upon returning to our hotel later that night, Josh and I were still hungry so we made an American-style beeline to the McDonalds (ugh) adjacent to our hotel. Yeah, that was lame but we were hungry for some carbs. 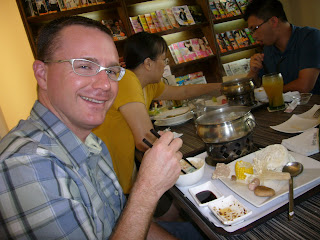 Josh eating his third hot pot in two days. When the vendors learned that he was a vegetarian, they'd go ahead and order it for him. Don't get him started on mushrooms, he probably ate a year's worth over the course of five days.

I think a westernized version of the hot pot could be cool. Give me a stronger base and more options of veggies to mix in.

One interesting meal that was given to me after a vendor asked me if I ate fish - a Filet 'o Fish and fries. Josh's veggie fried noodles looked pretty good to me that day. I also had some spaghetti at a small cafe, the first time I've seen octopus in spaghetti. At least it had a good tomato base.

By the end of the trip I was craving some good Mexican food and pizza.
Posted by Green Laker at 9:25 PM