Another odd VW in Hamburg, this time one that I had previously never known about.

It's not your first guess - a Toyota, but rather a VW Taro. Manufactured from 1989-97 in both Japan and the VW truck factory in Hanover Germany. At least according to the Wikipedia entry. 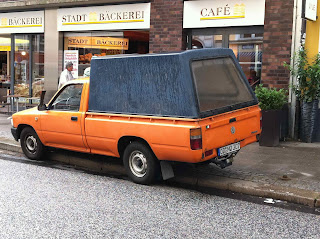 A true case in badge engineering, from what I can tell, about the only true VW bits on this small truck are the emblems. 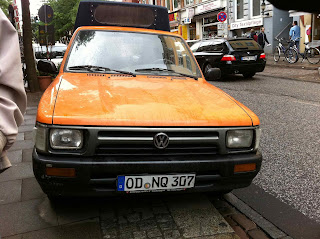 The owner did not like me taking pics - at first at least. He thought I was going to send them to the cops due to his illegal parking job. After I explained that I was just curious about the truck, he went so far as to pop the hood and show me the Toyota 2.4l diesel sitting between the fenders. 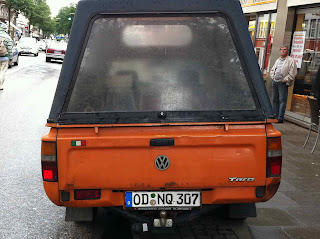 He was pretty proud of his truck, however I wasn't able to glean much information from his broken English (which is far better than my horrible German - "glockenspiel! verboten! ausfahrt!"). An interesting vehicle from the a Japanese/German collaboration.
Posted by Green Laker at 12:29 PM

Email ThisBlogThis!Share to TwitterShare to FacebookShare to Pinterest
Labels: cars, Down on the Street, Germany, Hamburg, Taro, VW