Back before the days of the Illinois Toll Authority's iPass system (and before they had video survelliance at every tool both), when you had to throw a fistfull of change to open the gates on the TriState, Necco Wafers were often found in my car. 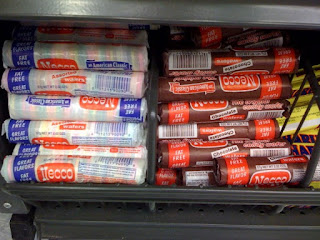 Why would I have these horrible-tasting "candies"? Well, when I started terrorizing the suburbs in my mom's sweet turd-brown 1981 Buick Skylark (powered by the mighty Iron Duke 4-banger) in the mid-80s, WLUP Chicago DJ combo of Steve Dahl and Garry Meier started talking about how these putrid pastel pucks were the *exact* dimensions of a US quarter.

Now of course I would *never* gyp the bottomless pit of Springfield or the Illinois Toll Authority out of their rightful .40, but from what I am told the technique was to stack two on top of each other and slide them down the basket so that they wouldn't break on the way down. Bingo, you just overpaid by ten cents! I also heard that it was a good idea to have .40 in coinage on hand just in case it didn't work - which might happen about 25% of the time.

Each roll holds 40 wafers - equivalent to a $10 roll of quarters. Not a bad investment, as long as you didn't get caught.
Posted by Green Laker at 5:45 AM