Kayaking Carlsbad with the Kid

Instead of going out for my weekly Saturday morning MTB ride, I decided to take Celeste kayaking at Carlsbad's Aqua Hedionda lagoon. Being protected water, it's a good place to bring a kid - and what better place to be than on the water on a cloudless summer day.
Before leaving there was the matter of installing roof racks and kayak carriers on Allie's car. Her car has been rack-free for the past 4-5 months, so the entire install and putting the boats up top took about an hour. 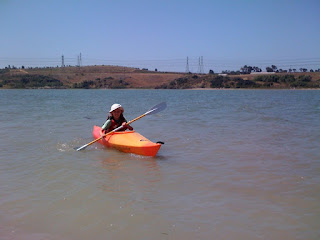 ahoy!
Celeste was quite eager to get in the water but tired relatively quickly after fighting the stiff breeze and (small) whitecaps. At that point I tied up her boat to mine to tow her to the other side of the lagoon where the water was smooth. Unfortunately, a few minutes into towing her, lost her balance while trying to stow her paddle and went into the drink.
She's been a good kayaker for the past two summers and spent many hours on our old canoe and wooden boat - so she has "sea legs". However, this is the first time she's capsized so she was a little bit stunned to suddenly be swimming. Her PFD ("a lifeguard" as she mis-spoke) kept her head well above water and managed to keep her paddle and Crocs from drifting away.

I managed to get a good deal of the water out of her boat before she climbed back on in, but there was still a few gallons of rolling ballast sloshing in the hull. If only I knew where I had left the portable bilge pump.

Towed back to shore, she laughed at the dogs frolicking on the beach - soggy but happy. When putting my boat onto the roof I heard some clunking coming from the rear compartment. Turns out I had placed a few paddling accessories (all purchased at the best paddlesports and outdoors shop in the world - Rutabaga) back there prior to the move, including the long-lost bilge pump and my Pelican case (which is sadly just a tad too small for an iPhone). 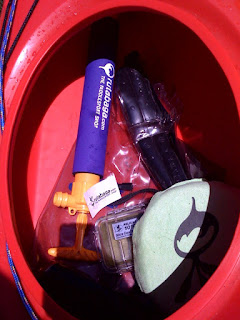 I'm leaving the racks on the car, maybe the water will be still in the morning.
Posted by Green Laker at 12:58 PM