Allie was craving pizza - and Grubby Chicago Style Pizza finally opened last week, so we decided to hit it to celebrate someone *finally* signing a lease on our Monona house.

It wasn't the full-service restaurant we were expecting, but it was fine by us. Kinda spartan and Chipotle-esque in decor (metal chairs, exposed HVAC and lighting), you order up at the counter and wait about 40 min for your pizza. 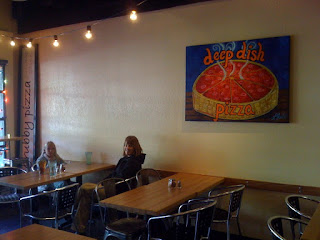 Just in case you forgot what they serve

The pizza was pretty dang good - and a true traditional Chicago deep dish. Good sauce, the right amount of gooey cheese and a fair amount of our spinach topping swimming in the mess. The crust, while Chicago-style in shape and depth wasn't quite spot-on, needing some corn meal to give it a golden glow and a nice crunch. I bet some nicely aged pizza pans would do wonders as well as deep dish in Chicago are generally served in blackened pans. Yes, it was ooey, hot and chewy. Dig the eye channel too.
And even though she'll kill me for posting a pic of her eating a slice of pizza, here's Celeste... 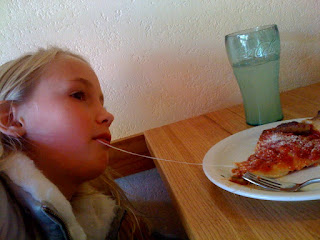 The three of us managed to kill a large. I probably ate half of it myself. Good thing I went for a mountain bike ride an hour later to burn off that gut bomb. Four hours later I'm still stuffed.

I'm certain we'll return to Grubby Pizza about once every 4-6 weeks or so.
Posted by Green Laker at 5:17 PM

We had SILO pizza last night. We always get the same when we visit my folks: one large deep dish with sundried tomatoes and a bunch of other stuff (nicknamed "Junky pizza") and one large thin crust cheese pizza (cut in squares and nicknamed, unexpicably, "Green Pizza"). Yum.

Can thin crust rightfully be cut into any shape other than squares? Me thinks no.

There's a pretty good Chicago deep dish outfit in the Bay Area called Zachary's (www.zacharys.com) with locations in Berkeley and Oakland. We usually hit one of 'em when we're up that way. I know this is sacrilegious, but I'm not much for Chicago's most famous deep dish--I hate Gino's East, Pizzeria Uno and Pizzeria Due. And while Lou Malnotti's is pretty good, there's a thousand plastic tablecloth neighborhood joints with better thin crust, IMHO.