Co-worker Ted found a brewery a few streets over in our office complex on Friday. Green Flash Brewing Company is in an unassuming white concrete "tip-up" building - just like every other business in North County. 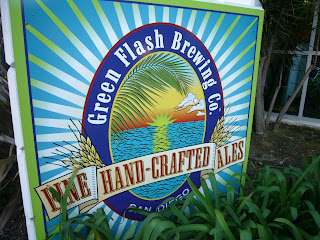 What makes Green Flash special on Friday afternoons is that they offer beer tasting from 3:30-7:30.

We decided to hop (pun intended) on some bikes and pedal on over to try some out. Prices were quite cheap - $3 for a pint. They also had samplers of all nine of their beers available for $6 - but I don't like trying out one beer after another.

I went with the Double Stout. Very good beer, it reminded me of the Dragon Stout I had in Jamaica years ago. Smooth, semi-sweet with some chocolate and caramel undertones. They say "Golden naked oats mashed with dark crystal and robust roasted malts create a luscious brew with a satin smooth finish. UK Target hops throughout the boil adds pleasant, earthy complexity." 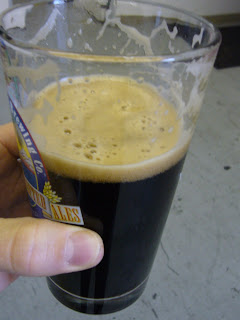 What was interesting is this beer had an 8.8% alcohol content. That's pretty high - I generally don't like beers with more than about 7% as they start to taste too bitter. 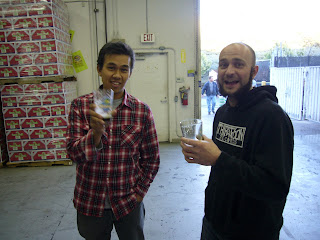 Ted (left) and Ollie (right) chose the Hop Head Red and Barley Wine.
I think my next trip over there will be on my front rack-equipped bike for ease of transporting a souvenir six pack home.
Posted by Green Laker at 8:21 PM