I spotted this rare Japanese-market "kei" car outside my hotel last week. 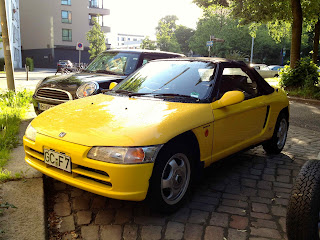 It's a diminutive Honda Beat. A mid-engine and rear wheel drive roadster, the Beat only saw a six year production run in the early 90s. This is the first one I've ever seen in the metal. 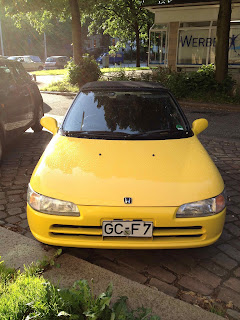 Powered by a 3 cylinder engine displacing all of 656 ccs. However, with Honda's engine ingenuity, they were able to muster 63HP out of this diminutive mill. Sure, that doesn't sound like much, but it's near the 100 bhp per liter mark that has long been considered an engineering achievement. To put it in perspective, my first car, a Subaru Shitbox Justy wheezed 66 HP out of 1189 ccs. And my Justy had nowhere near the 8100 RPM redline that the Beat has. 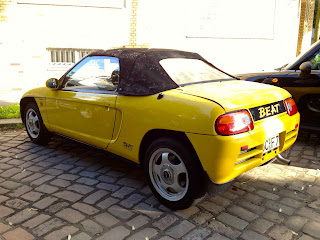 This thing is tiny, it's dwarfed by the adjacent Mini Cooper. And just in case you needed a reminder of the model, just look at the rear fill plate. 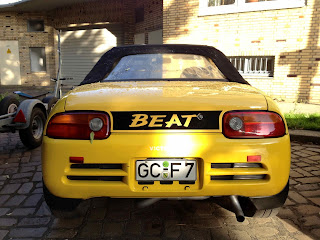 Two days later I spied a second Beat in the same neighborhood, without the BEAT logo across the rear. 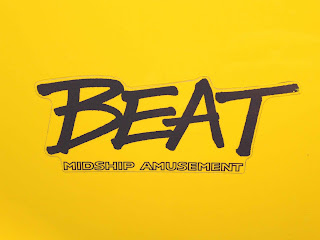 Email ThisBlogThis!Share to TwitterShare to FacebookShare to Pinterest
Labels: Beat, cars, Down on the Street, Germany, Hamburg, Honda, Kei car

This rare Japanese market "Kai" car which looks like it's pretty and its quality like it to me. I can easily say that the car is the preference of the customers. And the more benefits we offerandroid outlook

Thanks for shareing this helpfull info.i thinks"keyword"vs search quearies is really diffrent.if you need any information
please vissit my website

I will see and refer some information in our post.Thanks for shareing this helpfull info.i thinks"keyword"vs search quearies is really diffrent.if you need any information
please vissit my website

Ohh I see this post and I am very thankful to share this very important post. From this post we really gain many important things and also we get many Benefits from this. So thanks for this. And for more information like this please visit baby care tips

Very informative and It was an awesome post...... Save2pc Ultimate Crack