A major milestone for a borderline-OCD dweeb like me yesterday, as I was able to finally park two of our cars in the garage. 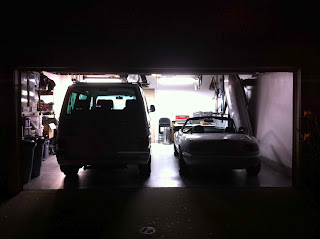 The biggest challenge was getting the Yakima SkyBox Pro 16 cargo box up and out of the way. The last garage was  a few feet wider in both length and depth, so the box was laid on it's side in a "dead corner". With space being at more of a premium here, I had to come up with a way to get this up on the wall.

I discovered an extra set of Yakima cross bars during the move; I'm pretty sure they were last used on my WRX wagon that I sold prior to making the move to California. Cut down and screwed into some Home Depot-sourced closet hanger rod brackets, I now had a bracket from which the cargo box could hang, using the same brackets that clamp to the bars when mounted on the van's roof. 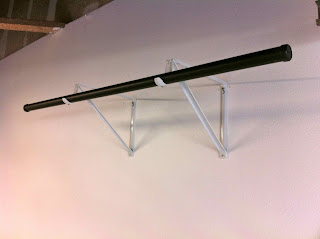 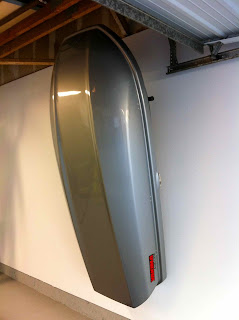 It's not perfect, but does the job using common and affordable components. It'd be just about perfect if they brackets were about half as deep, allowing for a flusher fit along the wall.
Posted by Green Laker at 7:45 AM

The article you have shared here very awesome. I really like and appreciated your work. I read deeply your article, the points you have mentioned in this article are useful. Garage Door Repair & Installation Services

First You got a great blog .I will be interested in more similar topics. i see you got really very useful topics, i will be always checking your blog thanks. jó ajánlat