Like the postcards I scanned and featured back in December '08 (here and here), this one is also addressed to Mr. John Davis (box 278) in Earlville, Ill. 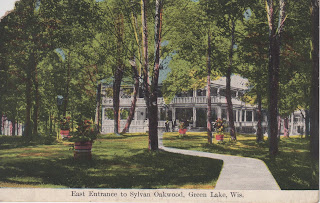 The Oakwood was founded in 1867, meaning the hotel had already been in operation for 42 years by the time this postcard was sent. 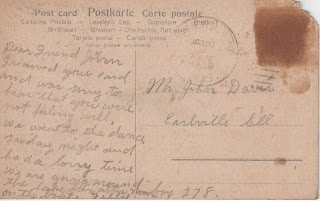 I received your card and was sorry to hear that you were not feeling well. We went to the dance Friday night and had a lousy time. We are going around the lake this afternoon on the boat.

Fellie
(at least that's what I think it says, the other two cards look like they're signed as "Bella").

I bet she took the Queen on the lake excursion. Bummer that she "had a lousy time" at the dance.

An even bigger bummer is that, after 142 years, the Oakwood Lodge is no longer in operation. Apparently everything was auctioned off last November 10th and their website is, for all intents and purposes, dead.
Posted by Green Laker at 8:06 PM