Okay, enough posts about cars for a little while (maybe until at least mid-week). Since I'm also a bike dork, I need to post some pedal-power. And where else to look but, er, Autoblog. 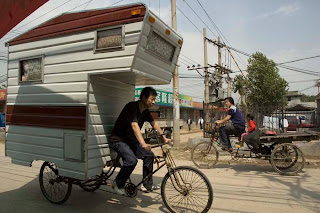 from the site:
"Our initial reaction when laying eyes on the Camper Bike was, 'Ah, there go necessity and invention hand-in-hand again...' But we were wrong. The Camper Bike – yes, with a fully working camper – is a 'functional sculptural piece,' which is to say, it's art.

Reading a little further, though, we began to wonder just what kind of art: paintings of it come with slogans like 'Scaling the summit with the Motherland in your heart,' and 'Camping far out in the wilderness forges a revolutionary heart.' We don't know if that makes this a propaganda piece, but we do know that riding a bike fitted with a camper, in the city, is plenty revolutionary. After that, it doesn't really matter where you go. Click the link for more on the visual candy that is the Camper Bike." 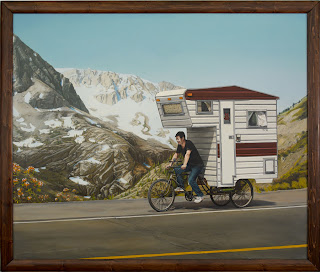 Personally I'm not sure I'd even want to pedal the trike up a mountain pass, not to mention carrying the several-hundred pound camper. 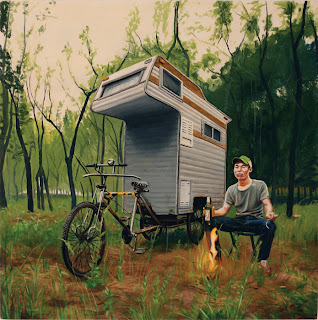 But how much better can you get than pedaling up to your makeshift campsite, building a campfire and enjoying a bottle of arsenic-tainted cheap Chairman Mao-brand liquor like a real man? 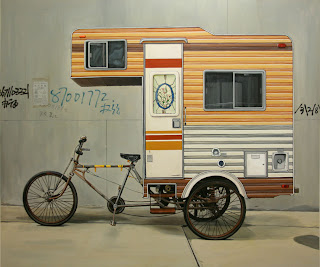 I'm a bigger fan of this paint scheme, complete with mis-matched door.

Build your own with these handy plans: 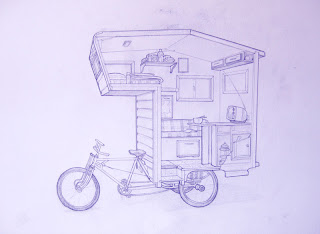 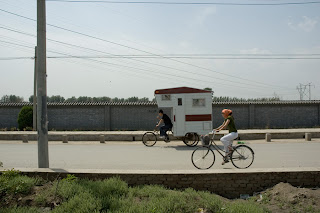 Awesome. My good friend Scott is looking for a suitable bike as he pedals across Germany tracing the rarely followed tracks of a second-rate, little known, German historian from the 17th century. I will make him aware of this forthwith.