I spied a couple of interesting machines that were straight outta the sixties on my short journey to Costco on Sunday. First up - an original Mini Cooper: 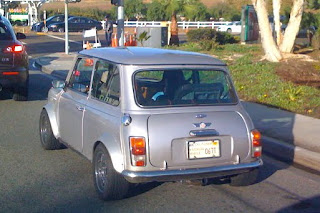 I followed this little Brit for a couple of miles, envious of it's fun efficiency and diminutive size - especially when compared to the van I was driving. The seating position of the van was at the roofline of the Mini.

It wasn't until it came to a stop that I discovered the rusty sills. Yep, the tinworm is taking its toll on Sir Alec Issigonis' masterpiece.

One of the few open spots at Costco was next to a car most likely to survive a nuclear holocaust - a late-60s Dodge Dart. 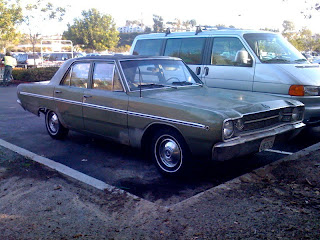 Powered by the insanely indestructible Slant Six, this Dart likely has half a million miles on it. 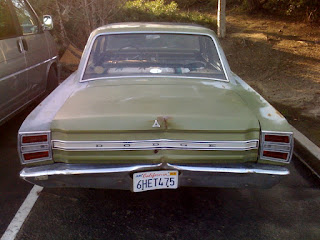 These all but disappeared on rust-belt roads 25 years ago. The body is battered but it's still pretty-much cancer-free.
Posted by Green Laker at 10:59 AM

Email ThisBlogThis!Share to TwitterShare to FacebookShare to Pinterest
Labels: Dart, Down on the Street, Mini, Slant SIx