I've owned this old A&W mug since I was about eight. It's been in kitchen cabinets in Danville, Homewood, Chicago, Naperville, Palatine and Libertyville Illinois, Boulder and Arvada Colorado, Monona Wisconsin and now Carlsbad California. That's a lot of moves for something I rarely use. 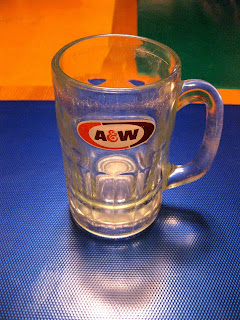 But still I can't seem to be able to part with it. Originally found against a concrete parking block in the parking lot of the Danville Jaycees park (before it was a county park)... 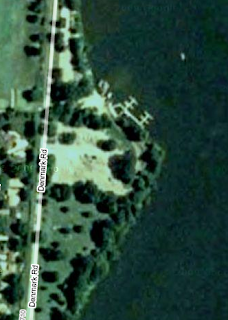 ...I still recall bringing this "treasure" home to my mom to wash so that I could drink from it at lunch that day. 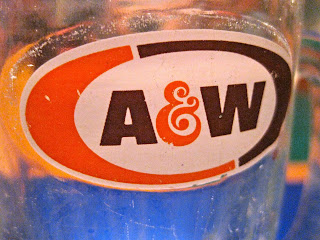 It's nowhere near mint, likely "borrowed" from Danville's A&W drive-in (owned by a neighbor of ours) before it was pitched from someone's car. But it has character. And at this point, if I've kept it this long, it's here to stay.
Posted by Green Laker at 11:45 AM

Email ThisBlogThis!Share to TwitterShare to FacebookShare to Pinterest
Labels: A and W, Danville, random trinket

TOTALLY AWESOME Liberty, Ill
is a town i know well.. not Libertywille.. isn't that the place where Ertle makes all their great toys, tractors and stuff. i know all the places you mentioned and ahve lived in illinois, my cousin was killed in Naperwile.. any wya we lived in Calforia < New Mexico and now Colorado, that mug is well traveled.. they are Great . Would you want to sell it?
i am visually impaired. please advise and greta job carrying it with you al these years.. i do not think the A AND W WILL MISS IT
thereusde to be one in Quincy, il, in hannibal that ws the best they
had the best root beer floats and you could watch the old paddle wheel oats go down the great and mighty Mississippi. if you want to sell it, honest;y cal l303 594 9295. thanks.