Album of the Week - DBT ACL

Once we sold our WI home, I made up for lost time and bought about a dozen CDs (remember those silver 5" discs?) that had come out over the summer. Paying both rent on a CA home and mortgage on the WI home left little disposable income for luxuries like entertainment. 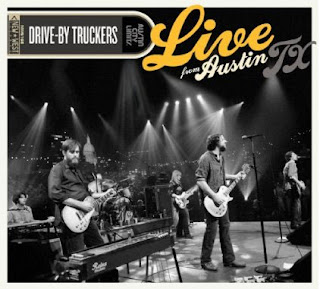 And while I am settling in and trying to absorb all of the discs, the one that has really stood out this week is Drive-By Truckers Live from Austin, TX/Austin City Limits. DBT's southern rock sound is a perfect mix of country, hard rock, R&B with punk attitude. Three songwriters belt out the vocals on their given songs and the three-guitar interplay shows off their true musicianship.

Recorded last September for the namesake PBS concert series, this disc shows DBT in prime made-for-TV form. Why made-for-TV? It's a bit mellower than than how I remember them when seeing the band live in Madison on The Dirty South tour a few years back, but watching the bonus DVD of this Austin City Limits show I didn't notice a couple of bottles of Jack Daniels being passed around either. It's still a great set that really shows off their fantastic songwriting and sounds particularly good cranked up even if it is abbreviated - DBT shows are usually much longer than 13 songs. This set comprises some of their best work from four of their five last (fantastic) albums. Now I'm just hoping they'll head out west and play a show in the San Diego area.

Check out their website - www.drivebytruckers.com
Posted by Green Laker at 6:18 AM

Email ThisBlogThis!Share to TwitterShare to FacebookShare to Pinterest
Labels: album of the week, Drive-By Truckers, music

after reading your post about them i thought about going through their album and i must say i am quite into them now. they are so good