Cycling the Streets of Hamburg

My trip to Germany ended in Hamburg, Germany's second most-populous city (1.8 million residents) and also home to the second-largest port in Europe. On the four and-a-half hour drive up on the Autobahns from Cologne I managed to push the little SEAT up to 209 kp/h while following an elderly man driving a VW Touran mini van. That old guy schooled me. Electra's European HQ is in Hamburg, and I wanted to visit the office, learn about their market along with their wants and needs and visit some cool German bike shops.

I arrived at my groovy hotel (more on that in a future post) late on Monday afternoon and set out on foot to find some dinner. Here are some photos from the journey. 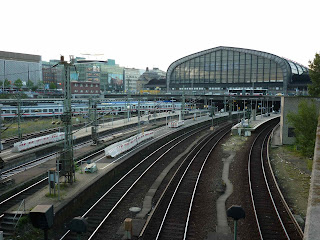 main train station
I found myself in a shopping district, I believe it was along Mönckebergstr. Plenty of outdoor cafés and the like to choose from... 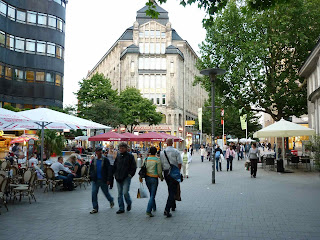 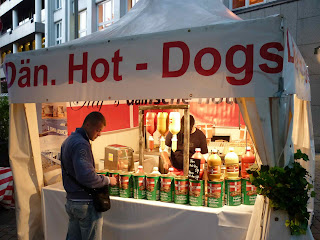 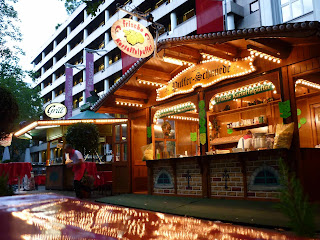 ...but I wanted something a bit more than fried potatoes. Ooh, a bäckeri... 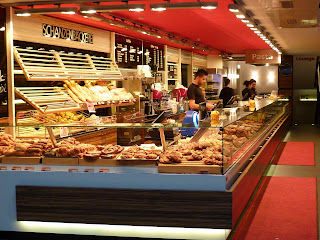 ...but they mainly had sweets and some bland-looking sandwiches. So I found (yet another) small pizza joint and enjoyed another great Germany pizza. After dinner I walked further east to check out Hamburg's Rathaus, or city hall. 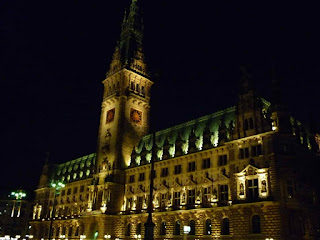 Built in neo-renaissance style between 1886-1897, it's Hamburg's city hall and occupies an entire city block. Quite stunning at night too. After spending some time at the Rathaus, I wandered past some of the high-end boutiques just to the north before taking a taxi back to my hotel.

The next morning I awoke to perfect late-summer weather and headed off to Electra GmbH for my morning meeting. After that was done I grabbed an Electra Amsterdam Balloon from their fleet (I have the same bike here at home) for my day's ride. Along the way I was able to take in many very cool parts of this historic city. 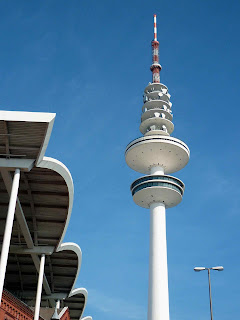 yet another groovy German communications tower

As part of my journey I passed the Reeperbahn district and St. Pauli. 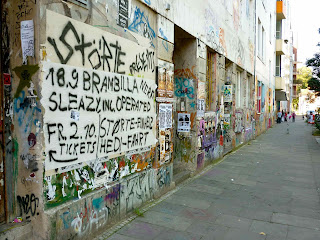 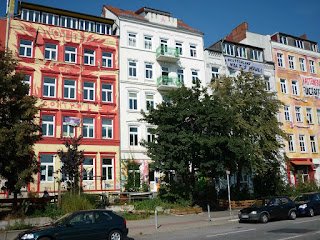 This is Hamburg's seedier part as well as home to it's red light district... 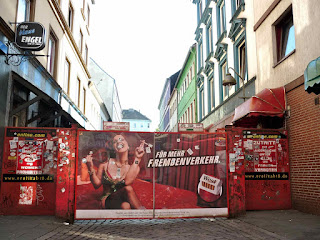 ...which isn't all that hoppin' at 10:30 AM. Note that the sign above states that those entering have to be at least 18 - and that no women are allowed. I doubt I could find any of the kinds of tools that I am interested in at the shop below. 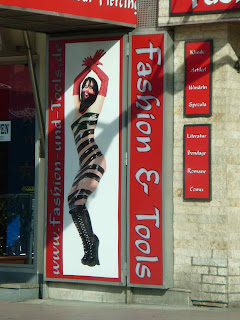 This is also the area of Hamburg where The Beatles regularly performed from 1960-1962. 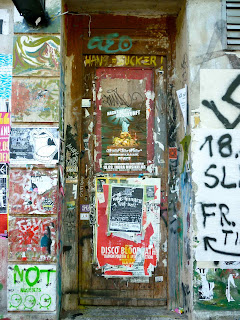 random doorway graffiti
More pedaling on the Amsterdam and I found myself approaching the harbor. 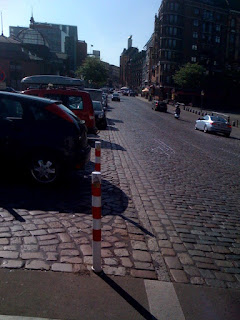 I should add that the Schwalbe Fat Franks 2.35" wide tires were fantastic on the pavers. 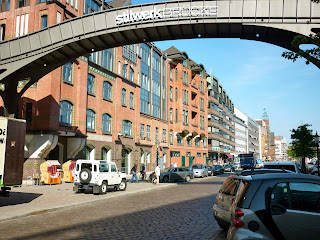 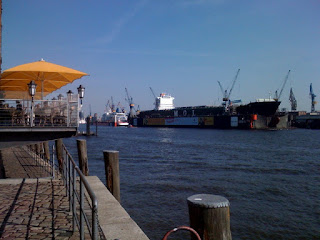 I found the warehouse district the most interesting part of the city. Built in the 1880s to, uh, warehouse the goods offloaded in the ports, the large brick buildings have very interesting canals running between them. 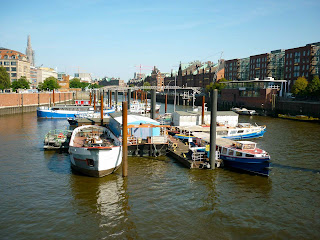 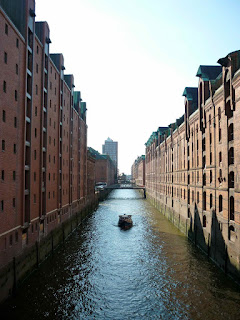 Looking up you can see the apparatus for hoisting crates of cargo long ago: 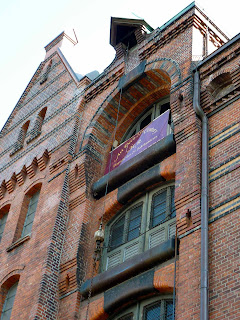 After sitting virtually-abandoned for decades, these buildings have been rehabbed and now house offices, restaurants and other small businesses. 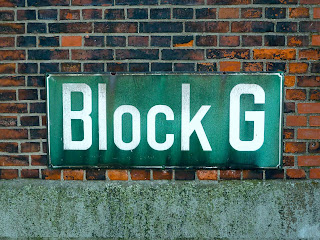 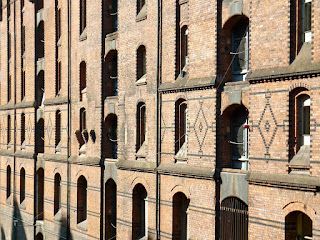 With my shop visits complete and GPS battery running low, I chose my route carefully so that I'd be less-prone to becoming lost - so I decided to ride around Hamburg's inner-city lakes, Binnenalster and Aussenalster. 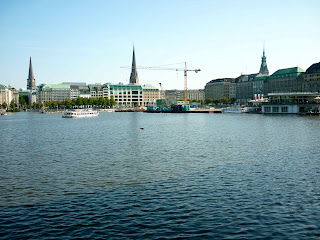 Some of Hamburg's grand old office buildings face Binnenalster, the smaller of the two lakes that is also closer to Hamburg's downtown. 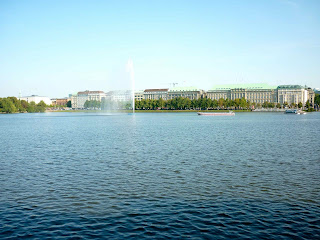 Aussenalster has very Madison-esque bike and walking paths surrounding it. Being a beautiful day, the round-the-lake ride or run was a popular late-afternoon diversion for Hamburgers (yes, that's what the residents are called). 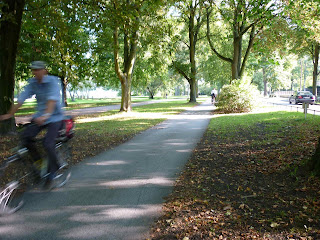 Overall I was able to get in a leisurely 25-mile ride over the course of the day. Here's where I went - well, most of where I went, I accidentally forgot to resume the GPS's tracking function a couple of times. 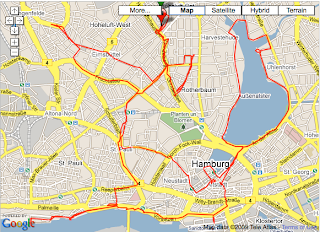 And thanks to Akki and the Electra Hamburg staff for the hospitality and letting me borrow the Amsterdam Balloon. 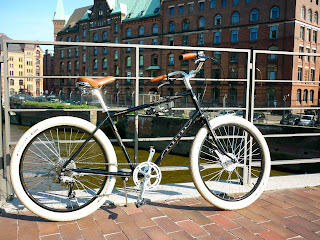 And finally, I saw this sweet late-model Mini Cooper parked outside the great restaurant we hit for dinner: 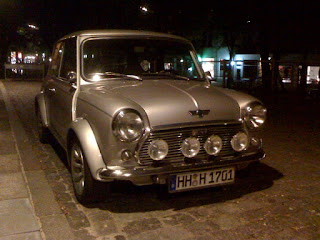 If only I could have crammed it in my carry-on luggage.
Posted by Green Laker at 8:37 PM