Exploring/Cycling the Streets of Köln

Contrary to popular belief (mainly held by my brother), Germany wasn't all about the driving experiences. The purpose of the trip was for a bicycle trade show. Not just any trade show, but the world's largest and the world's best (and, incidentally, worlds better than Interbike, happening in Las Vegas next week). And while I did spend more time behind the wheel than I did on two wheels, I cherished the opportunity to explore some very cool cities via bicycle. Okay, time to regain some of my carbon credits.

After heading up from the Porsche Museum in Stuttgart, I arrived in Köln/Cologne and checked into my groovy little Euro hotel room (on the top floor, unseen from the street as I had a shared balcony)... 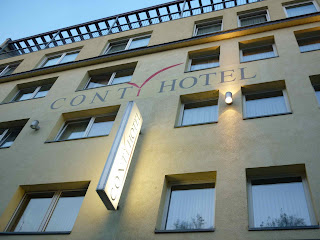 ...and did some exploring by foot prior to meeting my contact, who was to provide me with a bike to ride around. He put me up in a cool neighborhood, incidentally the same one that he lives in and that his business is located in. Nice restaurant row around the corner: 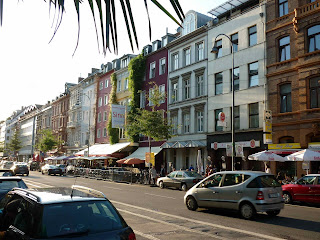 The Bier Bike was getting ready to depart with what appeared to be a bachlorette party. 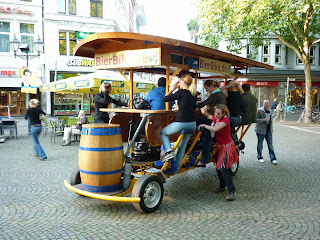 A pedal-powered pub in a city where it's 100% legit to walk down the streets with a beer (or "bier") in hand. And here's demonstration of a great way to work off that beer gut.

I passed an Electra retailer that had a lot of our bikes on the floor: 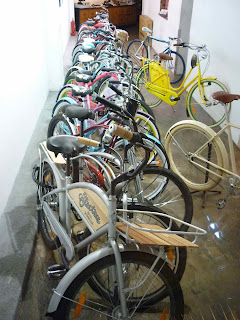 So nice to see such great representation of the brand. Turns out that this was just a fraction of the Electras in stock at this particular shop (owned by our German parts distributor). Later I ended up in a bar-zone and encountered all sorts of Germans out having fun: 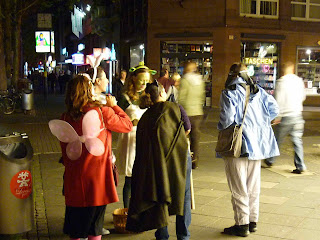 Or maybe to much fun, perhaps this crew had stopped by this fine establishment prior to heading out for the evening: 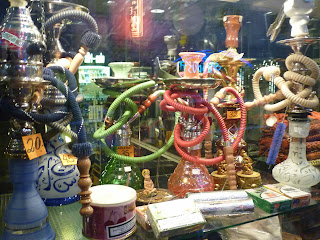 Anyway, I ended up meeting my contact for a nice pizza dinner at an Italian cafe - Montanara Inn. 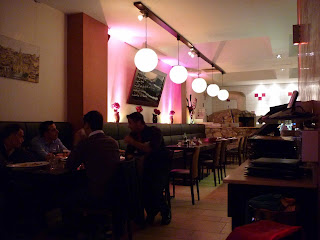 It's odd, but I've had some of the best pizzas in Germany. The one from here was no exception, fresh out of a wood-fired oven.

The next morning I awoke to clear skies and perfect late-summer temps. Grabbed my borrowed (and un-stolen) Townie Balloon 3i from the street and headed out for a ride with the hour or so of free time I had prior to my meeting. 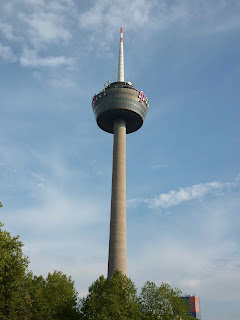 This T-Mobile tower apparently once housed a disco. Now vacant aside from the communications equipment, it's still a cool piece of 60s architecture. Now on to the cycling...

The Electra Townie Balloon 3i was a perfect ride for Köln. 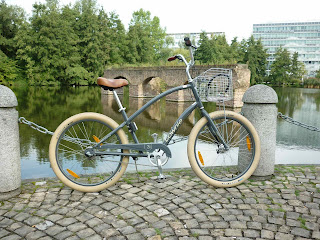 A nice head-up riding position, 3 speeds are all that's needed for the relatively flat topography and the Schwalble Fat Frank balloon tires do a fantastic job taking the edge off the granite curbs and brick cycle lanes.

And speaking of cycle lanes, the Germans do a great job of separating cyclists from motorists and pedestrians. Similar to what George Bush famously said about the humans and fish ("I know that the human being and fish can coexist"), all forms of transportation can coexist in urban areas. For the most part, cyclists just need to stay on the red brick portion of the sidewalk... 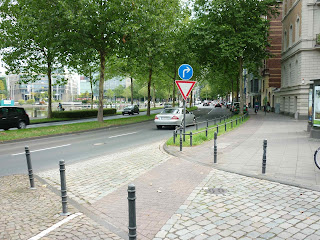 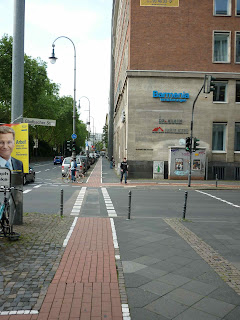 ...or better yet, enjoy an exclusive lane or path: 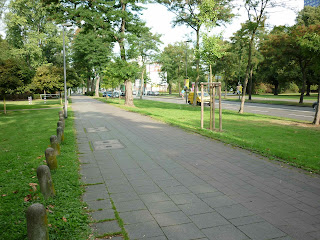 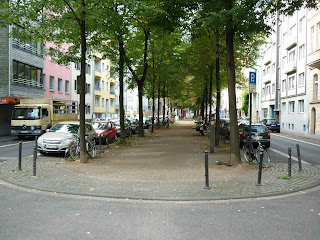 Any route chosen was good. Cars were very good about leaving space when I had to ride the road while pedestrians did a great job of staying off the brick lanes.

I had to run back to the distributor for my meeting, returning the bike in the process. After the meeting I had to head up to Hamburg. More on that later. For now enjoy one more shot of the Townie Balloon in Köln. 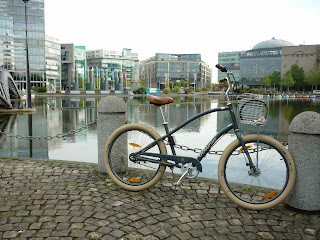