Exiled At The Scanner

To go along with all of this compulsive photo scanning I've been up to this past week, I've been playing music from the era.
Cranking up the iTunes and playing early-90s albums like My Bloody Valentine's Loveless, Green Mind from Dinosaur Jr along with albums I discovered during that era - The Modern Lovers' self-titled LP, etc. But the album that keeps going thru my head the most is Liz Phair's Exile in Guyville. 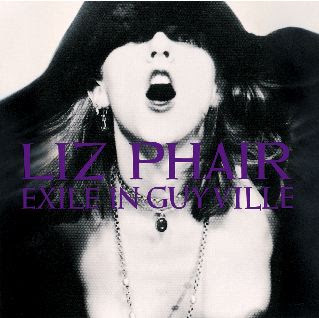 The album received loads of praise upon its 1993 debut. Great, often-profane lyrics, simple song structures and basic lo-fi production by Brad Wood. Eighteen tracks sprawling over an hour, this album was in constant rotation to the point of being overplayed at the record store I worked at in the early 90s. I guess that's why I pretty much stopped listening to it two years after it came out.
I'm happy to have rediscovered it within the last year. Now maybe I should go out and buy the deluxe reissue.
Posted by Green Laker at 8:58 AM