US Department of Transportation-spec lighting leaves a lot to be desired. The beam pattern that the DOT dictates gives a blobby, non-uniform light pattern. The Euros, in typical fashion, do it right. Euro lighting has nice, crisp cutoffs with their beam patterns. Since the "NA" series Miata uses common 7" round bulbs, it was an easy and surprisingly affordable upgrade to European "H4" headlamps.

Updating the lights has been on my to-do list, but a bit down. Suspension work is definitely needed next. However, over on the VW Vortex Vans and Transporters Parts classifieds page was an ad for a set of new-old-stock Bosch H4 E-code (European spec) at a price that I couldn't pass up. Funds were sent to Quebec via PayPal and I received these Swedish-made Bosch lamps in about a week. 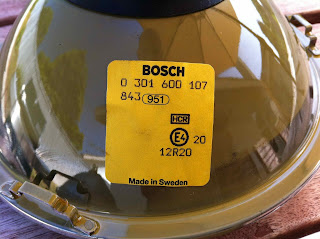 Also included was a set of new bulbs, but with an 80W low and 100W high elements, I was afraid of damaging the car's stock wiring harness. Maybe someday I'll get around to wiring the lights directly to the trunk-mounted batter and using a relay. Not yet. For now I'll be using a pair of Hella H4 Xenon Premium +50% bulbs that I picked up from Susquehanna MotorSports. 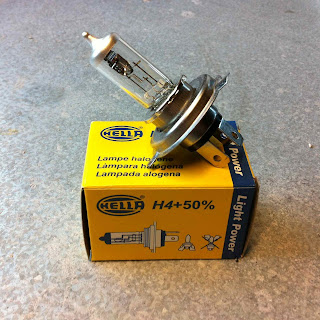 Anyway, the H4s definitely have a different appearance, with a much flatter lens: 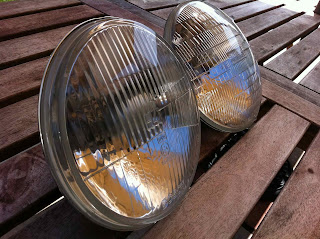 H4 on left, DOT-spec on right
The pattern molded into the lens is also different: 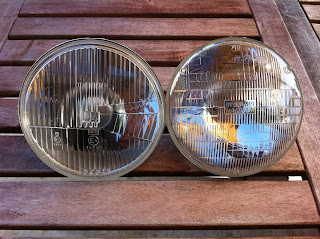 Install was super-easy, requiring only a Phillips screwdriver and about fifteen minutes of time. 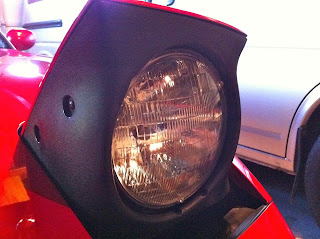 Remove the plastic shroud, then loosen the three screws on the retaining ring and twist a few degrees counter-clockwise to remove: 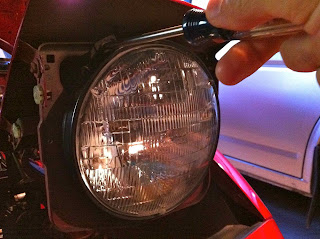 Pull out the old lamp and disconnect the three-wire connector: 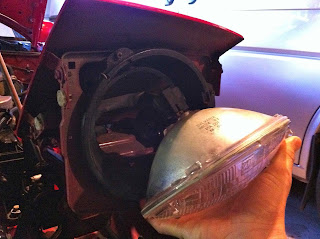 Then, in typical Haynes Manual fashion, installation is opposite of removal. Looks good so far: 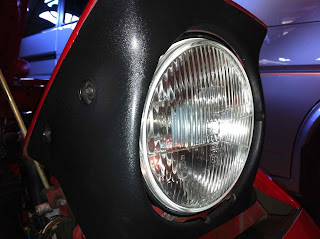 The next step will be aiming them within factory spec. I didn't notice the old lights being poorly aimed, but have a feeling that the E-code lamps will be a bit less-tolerant of being aimed out-of-spec. 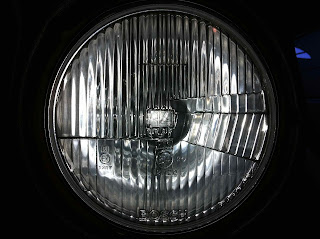 I just need to find a good wall.
Posted by Green Laker at 6:00 PM