Upon exiting a Carlsbad restaurant today I discovered this tiny treat of a Triumph parked alongside my van. 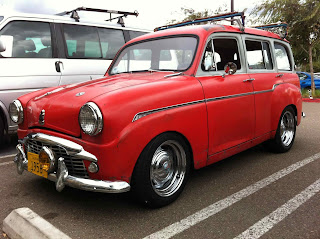 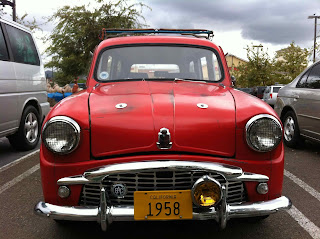 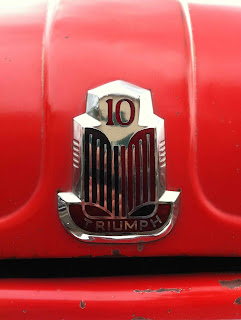 ...and the hood is adorned by an equally-appealing badge.

But even cooler are the globe badges found on the hubcaps... 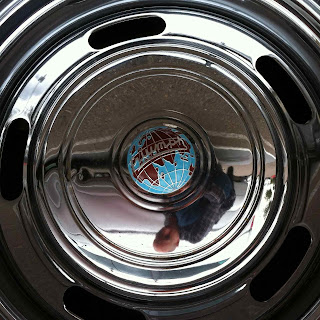 (ignore the reflection of the dork) 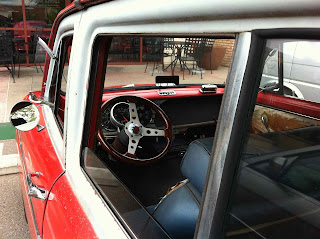 Some may notice the subtle Ford V8 badging on the rear rear hatch, along with the hood pins on the first two images. Hmm, aside from the wide rear wheels, there's not much evidence of an enhanced powerplant. 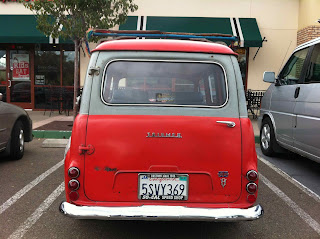 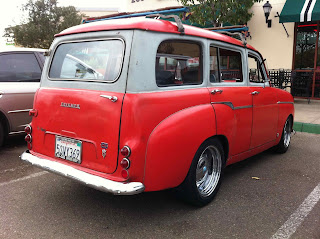 Patina - it's got it in spades. With the cross bars, I'm certain that it's spent a fair number of days at the local beaches. It'd be a crime to repaint it. 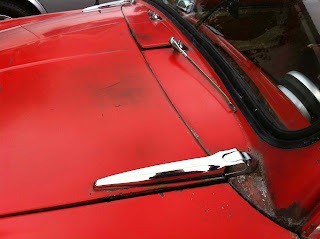 Spending a little time with the Googles tonight I found that San Diego über car nerd (and of course I say that in a good way) Jesse from the Just A Car Guy blog shot the car three and a half years ago. Better yet, the Ford V8 badges are legit, as the owner's web page states that it's powered by a Ford 302 V8.
Posted by Green Laker at 7:35 PM

Email ThisBlogThis!Share to TwitterShare to FacebookShare to Pinterest
Labels: Carlsbad, cars, Down on the Street, Triumph

OK, now THAT is cool. I had never heard of them. Nice job with the GoogleFu too. The back story is great.

San Diego Uber Car nerd is complimented! That's a superb GoogeFu you laid out, my compliments!

Hello GREEN LAKER!
Great post on the Triumph TR10 Estate Wagon from last year. Love this car! There is around 7-15 of these left on the road. I know this because my Dad bought this one new in 1958. After he died, I brought the car to San Diego. It is a complete redo. The only part left is the body. New custom frame, Ford 302 V8, Front & rear 11" disk brakes, and more! Thanks again!!

Gorgeous, GoogeFu you did awesome sharing about Ford 302 Thermostat Housing. Its a superb car.