Well, the World's Fattest Lab has slimmed down considerably since we picked her up in the Spring. She's still a bit overweight with a belly full o' flab, but you can at least see some "hips" on the old girl. 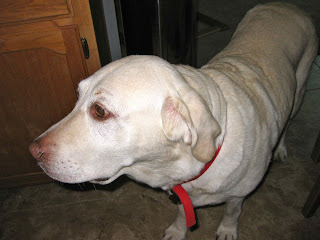 Back in March she was weighing in at 125 lbs. Last time she was we checked, prior to going on prescription dog food (which makes her burp - a lot), the scales showed 104. We just need to get her down under 95 in order to have her spayed. Two brisk 30 minute walks per day have also helped.

She's been a great addition to the family. Pretty mellow for the most part - but still spunky when you get a tennis ball out or say "walk" (and especially - and obviously "eat"). She also enjoys a little tug of war with her rope toy. We're just working on her behavior with other dogs as she will sometimes growl at other dogs. But maybe that's just because she's an old bitch.
Posted by Green Laker at 2:00 PM

Email ThisBlogThis!Share to TwitterShare to FacebookShare to Pinterest
Labels: Juno