And Now a Page From the Funnies

Actually I've never called comics "the funnies" - but you bet your britches my Grandma Esch did. She also called the couch/sofa a "davenport". But she's not the topic of this vapid blog post. This time anyway.

Since I'll be traveling internationally starting this weekend, I need reading material to help kill time while in the air. So me and the grrrls headed on down to ye olde Borders Book Shoppe on Sunday to grab a few things (Lonely Planet's Germany and P.J. O'Rourke's Driving Like Crazy for those that care).

One thing that I have been quite successful at is getting Celeste in to comics. I'm not a comic book kind-of-guy, but I do read many of the strips that run in the daily paper - the North County Times in this case. And since Celeste has been old enough to understand these brightly-colored pages (which make for frugal kid's wrapping paper in this household), I deliver them to her loft bed every Sunday morning. 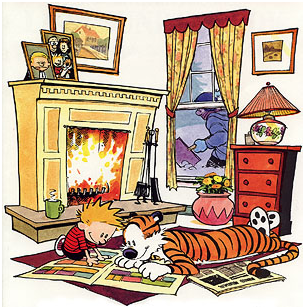 Sadly though she doesn't get to enjoy Calvin and Hobbes the way I did during it's influential ten-year run. So while at the book store, I tore her away from her perch at the Warriors Cats book section and planted her down in the humor section. Before she could get her paws on some lame Garfield book, I presented her with a one of Bill Watterson's collections. She was instantly smitten.

So the next stop was the Carlsbad library where we found only one C&H book on the shelves. At this point over 150 of the 253 pages in the book have been devoured in less than 24 hours.

Celeste and Calvin share many traits. Here's a scenario that's all-to-familiar in our household (click to enlarge)... 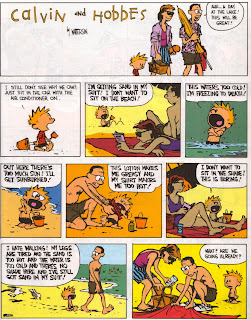 Celeste will even admit that. In fact she's the one that brought this strip to my attention. She absolutely dreads the idea of going to the beach, but loves the community swimming pool. But every time we bring her to the beach her mood changes and she has a blast and we have to end up dragging her home.

Hopefully we'll buy some Calvin and Hobbes books soon to add to the collection of Peanuts books from my childhood. We'll read 'em on the davenport.
Posted by Green Laker at 7:01 PM