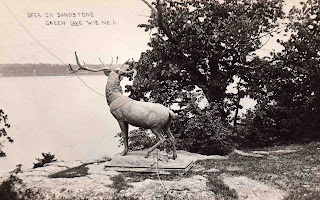 Ahh, another one of my favorites. "Deer on Sandstone", printed even though there's a large crack on the glass negative. As a kid, my brother, cousins and I used to paddle our grandparent's tipsy pale yellow fiberglass Forester canoe on down to Sandstone Bluff. Quite an excursion when you're eleven or so. I also remember the majestic deer statue on top of the bluff when I was very young. Not sure what ever happened to it (maybe someone can fill me in). Some drunk teenagers probably pushed it into the lake late one night. Damn kids. 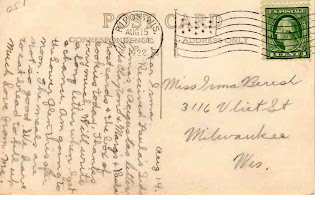 Dear Irma.
Received Paula's Sid's, Irma's & Augustas letters, Mrs. Clayton's & Marg's & Paula postcards & the box of cookies today. Thanks very much. Will write a long letter when I get a chance. Am going to the Lower Glen this afternoon. The meals are not so good. We have to eat bread to fill up. Much love from me. 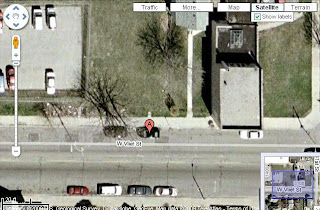