I had another great ride on Friday with my friend Derrick and some of his other friends.

We hit the Chiquito trail that lays in the Cleveland National Forest, just off the Ortega Highway west of Lake Elsinore. 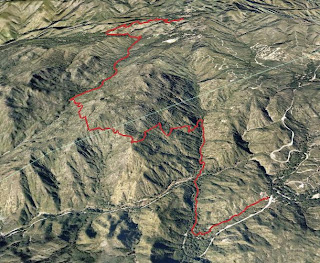 The trail is a classic shuttle run for most. Most that only want to ride mostly downhill and don't feel like suffering on the climb back up.

Starting at about 3350', the trail drops to 2000' pver the course of it's 9 mile length. Encompassing huge variations in terrain - from soft loamy soil to sandstone, the variety - and the descent - makes this trail especially fun.

I had to borrow a bike since my "big" bike has a blown-up fork. Thankfully I was able to borrow this bike from Bike Magazine's review fleet. 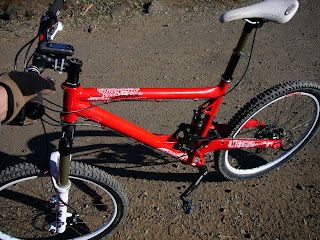 It's a 6" travel Commencal Meta 6.2. More bike than I am use to riding, both in travel and in weight, but once I got a feel for the beast, it suited my needs. 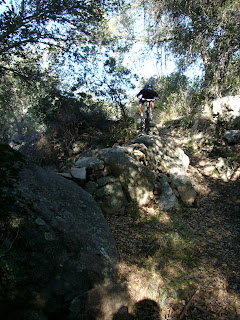 The trail has lots of man-made enhancements, including this little rock ledge. Super-flowy and smooth at times and rocky and technical at others with consequences. Make sure you're alert and you'll have a great ride. 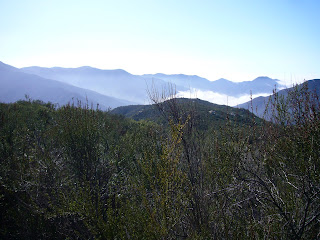 While the coastal regions were encased in fog (see it on the right side of the center of the photo), we were enjoying clear skies and temps in the low 60s. 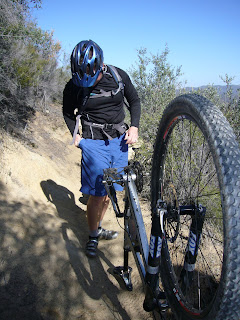 Unfortunately the technical nature of the trail did take its toll on some riders' bikes. Two derailleur hangers were destroyed and a few tubes were punctured. But we all made it back, albiet a little later than expected.
Posted by Green Laker at 4:16 PM

how come no pics of the "scar"