Saturday + in-laws = mandatory field trip. We gave Joan and Fred some options and we decided on Hollywood. Allie, Celeste and I had yet to visit the tourist trap but I did drive down Hollywood Blvd. a few years back when I had time to kill prior to a red-eye flight out of LAX.

As is always the case, we loaded up Klaus and drove an hour and a half up "the five". For some reason Californians love adding "the" before the freeway number. Midwesterners never say "the 294" or "the 39-90-94". When in Rome...

Our first stop (and conveniently across the street from the parking garage) was the Hotel Roosevelt. Built in 1927 and host of the first Academy Awards, it's a historic Spanish-style building that is now a boutique hotel that many young celebutards now stay. Others who have stayed include Charlie Chaplin, Marilyn Monroe, Will Rogers, Frank Sinatra, Al Jolson, etc. 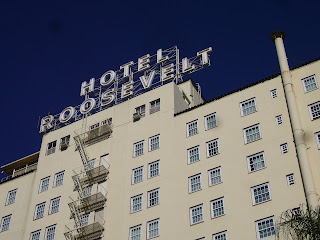 There were a few hipper-than-thou dudes and chicks hanging out by the door, waiting for their valet-parked BMWs to be delivered 30' to them, but we didn't recognize anyone.

The interior of the place is beautiful - you can tell they spent a lot of money during its recent rehab. Kinda like many of the celebrities likely housed within. 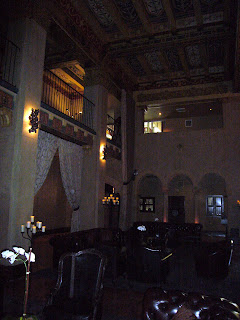 I only had the point-and-shoot camera - not good in low-light conditions
Anyway, enough cynicism. Roughly across the street from the Roosevelt is Grauman's Chinese Theater, or as Allie misspoke it - "Chinese Mann Theater". 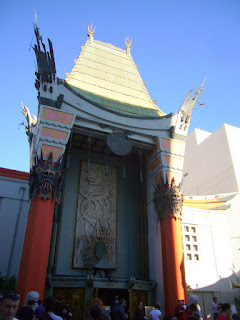 It is here where you'll find the hand prints, footprints and signatures of all of your favorite celebrities scrawled in the concrete as permanent graffiti. America's favorite actress/ex-casino owner has been here: 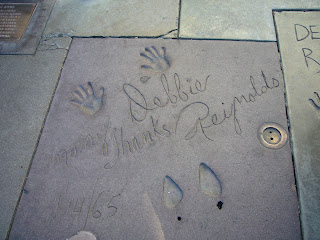 The hotel and theater are both on Hollywood Blvd, so we wandered down the street a bit. It didn't take us long to find the big names of Lefty Frizzell and Chubby Brocolli! 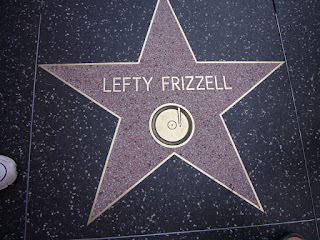 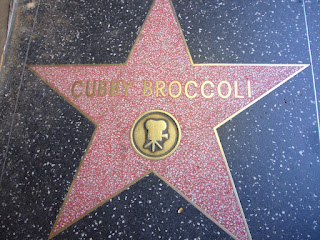 And the famous "fur hag" triplets - Mary, Kate and Ashley... 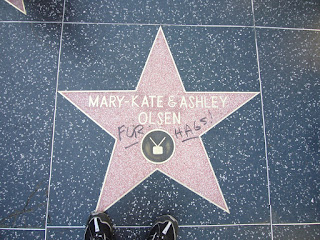 Allie and her mom wanted to see the Hollywood Museum. Knowing this would bore Celeste to tears, Fred, Celeste and I hit the adjacent Ripley's Believe it or Not Museum. Plus Celeste has been checking out Ripley books from the library lately.

Are there any tourist traps in the US without a Ripley's museum? Me thinks no.

They had the usual selection of multi-headed creatures and humans... 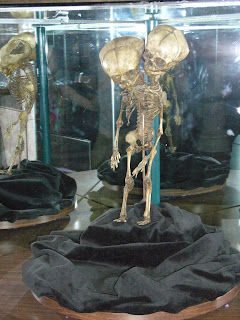 ...and oddities like a model of the Queen Mary that a guy paddled 1000 miles down the Atlantic coast. 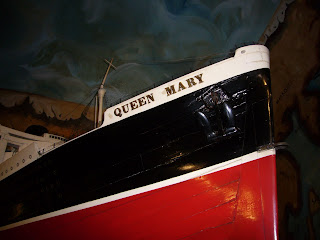 It was a fun way to kill some time. Allie and Joan told us about the Hollywood Museum, sounds like an interesting place. The building originally housed Max Factor cosmetics and had rooms painted in different colors that complemented the hair colors of the actresses who would get consulted on what make up would be best for them. I'm sure I'm getting this all wrong and that Allie is going to poke holes in what I'm writing. Oh well.

We drove further down Hollywood Blvd - lots of t-shirt shops, some bars, tattoo parlors, etc. The iconic Capitol Records building is just a couple of blocks north and was picture-worthy. Well, to me anyway. 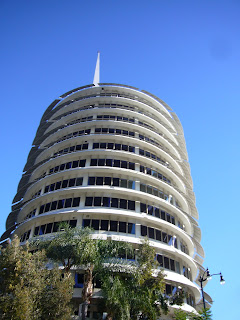 Celeste really wanted to see Lassie's star, and we were able to find it in the 6300 block. 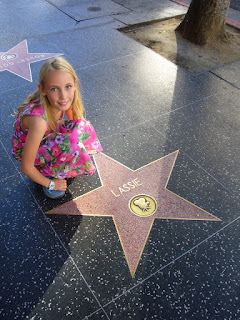 We then headed through Beverly Hills and down Rodeo drive. Kind of interesting that one week prior I was driving through Bombay Beach, CA - one of the poorest communities (if you want to call it that) in the state.
Posted by Green Laker at 6:19 PM