One of the weaker aspects of my Miata is the top, which I believe to be original. It's weathered twenty years of SoCal sun (when not placed in its proper, stowed position for motoring the mostly-sunny streets of North County).

The rear plastic window has been replaced at least once, and unfortunately, with a zipper that isn't all that great. An eight inch section at the top on the driver's side won't engage all the way - not a *huge deal* as there is a top flap that still offers weather protection - and I generally have the top down anyway.

But the biggest issue is, or, rather, was, that there wasn't a stop at the end of the of the zipper's run. So the first time I went to zip up the window (after frustratingly fumbling through the section that didn't fully engage), the zipper pull went off the track and ended up in my hands.

So, grabbing a needle and an antique roll of Coats & Clark's Extra Strong Button & Carpet thread from the sewing kit... 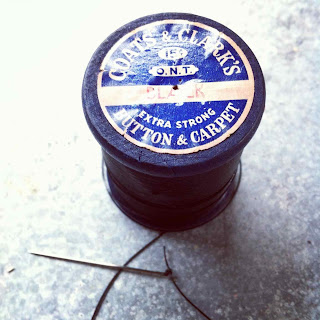 note the price - only 15¢
...and used my rudimentary sewing skills to add a stop. 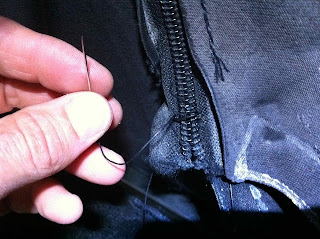 Yeah, far too much text for something so stupidly simple.
Posted by Green Laker at 6:03 AM