Once the car was in my possession, I could start to inventory what it needs and the changes I’d want to make on down the line.

First and foremost, the engine: 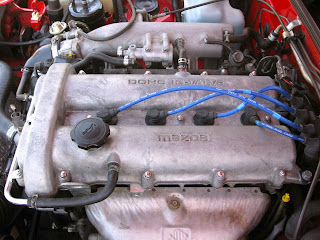 An eager, free-revving 1.6l engine with an iron block and 16 valve alloy head that becomes even more energetic as the revs climb to it’s 7,000 RPM redline. A raspy exhaust note from the original muffler helps give the (false) impression of speed. Overall the car feels like it has more than 116 HP and 100 lb-ft of torque. Then again, it only has to move 2100 lbs. It's pretty clean under the hood at the moment, but will get detailed by me on down the line. 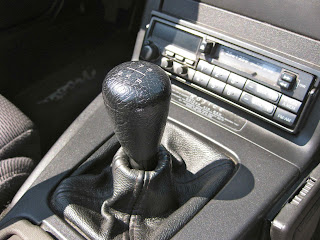 The Miata’s gearbox and oh-so direct linkage should me a model for every row-your-own automotive transmission. Snick-snick-snick as it slips through the five forward speeds, in an even-more direct manner than the SRAM Red Double Tap shifters on my Moots. However, the gearbox is slightly notchy when cold. This should be easily remedied by replacing the trans oil with a few quarts of fresh synthetic lube. 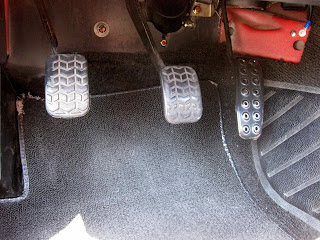 Very progressive and easy-to-use. Like the transmission, it works better once it’s a little bit warmed up. There’s a slight shudder at the first two stop signs I pull away from in the morning. Easily remedied by slipping it slightly. No plans on making any changes at this time.

Brakes: A recent receipt for a set of high-performance Hawk HP brake pads was in the file folder that came with the car. They’re a little noisy at low-speeds, but that’s the nature of these pads. Pedal feel is good overall, but I may upgrade to stainless steel braided lines eventually. 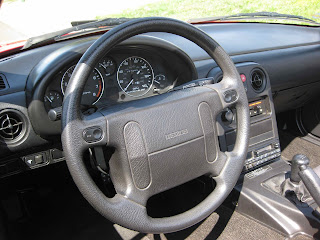 Everything is nice and tight. With a manual rack (3.3 turns lock-to-lock), it just feels elemental and analog. Parallel parking it the other day was interesting. But with the light body and 185-section tires, it wasn’t difficult. Power steering is just taken for granted at this point, the last car I had with a manual rack was a 1967 SAAB 95 that I sold almost ten years ago. 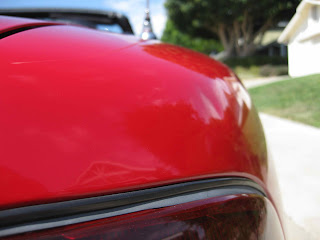 As mentioned in an earlier post, the car has been garaged in Carlsbad since new. There is not a spec of rust on it anywhere and there is no evidence of it ever having had any collision repair. And while the red paint was slightly oxidized, four hours or so of work with a clay bar, a buffer, polish and two waxes yielded a very respectable finish on most of the sheet metal. The painted plastic front bumper and the plastic rear license plate surround wear slightly varying shades of red, but nothing unexpected for original twenty year-old paint. A few light door dings are present as well. A professional polishing combined with paintless dent removal service would bring the car up to the next level.

The top is also in nice shape and the plastic rear window was replaced last year. Aside from a brief garage inspection, it’s been stowed since purchase.

Interior:
Overall very clean. Good carpets, decent (if faded) seats and rich, un-cracked plastic bits. You can see how much the seats have faded when flipping the headrest zipper flap back: 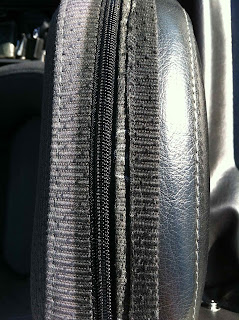 The driver's door panel has three screws holding it on that were not Mazda-installed: 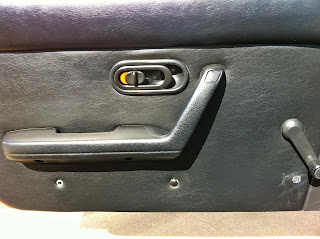 I've found decent door panels for sale on Craigslist for all of $30, but they were up in the LA area. Replacement will likely happen when I replace the door speakers, which brings me to...

Audio:
As a music geek, I have to have a decent stereo in my car. Nothing obnoxious or bass-heavy. Just good enough for me to be able to hear it clearly without distortion. The driver-side door speaker puts out about half the volume as the passenger-side at the moment, not sure if it's an issue with the speakers, wiring or head unit. Either way, the door speakers will both be eventually replaced, as will the headrest speakers: 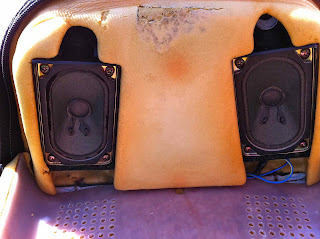 Base Miatas were not sold with headrest speakers (or even a stereo for that matter). The original owner had these cheapo paper Mazda OEM speakers installed when she had the Sony head unit installed (as seen in an image above). But twenty years have not been kind to these paper wonders. In fact, they sound so bad that I keep the fader switched to power only the front speakers. An OEM Miata head unit was included with the car. An electrical engineer/Miata enthusiast will be restoring and making a few modifications to my OEM head unit in November, at which point it will also have an auxiliary input for iPod use. He also offers superior and stock size headrest speakers for $50/set. Why not go with a modern aftermarket unit? I don't want it to get stolen. At this point there's no use or market value for a twenty year-old stock tape deck. The car can then have the desired functionality (aux input) and the original appearance of the Mazda head unit. 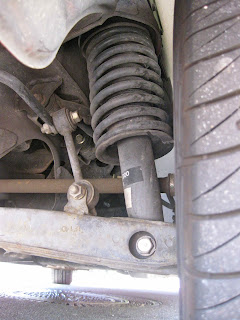 This is probably the first mechanical thing that I will attend to. After twenty years and nearly 100k miles of service, I feel that the original shocks are very well near the end of their useful life. While the ride is still acceptable and suffers no ill handling, I’m sure the cornering and ride will be further improved with some fresh dampeners at each corner. Research into different options has begun - Bilstein shocks/struts with stock springs, a Flyin’ Miata upgrade kit or ??.

Tires were replaced earlier this year and are 195/60/14, wrapped around the heavy base-model steel wheels. 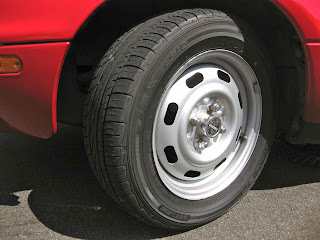 I kind of like the basic look of the steelies, but a set of 15 x 6” Miata five spoke alloy wheels has already been procured locally. 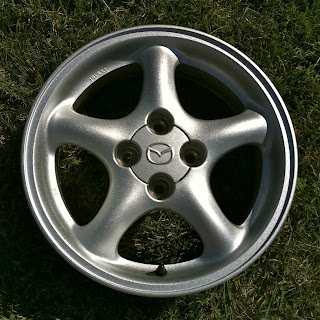 Original OEM Mazda from the ’99 Miata with the Sport package, these weigh in at 13.1 pound each, 4.9 lbs or 28% less each than the steelies, reducing unsprung weight, improving performance, and, best of all, enhancing the appearance. Plus, I could see them in person prior to the purchase and didn't have to spend money on shipping.

The alloys will be finished with a 195/50/15 tires. I’m just waiting for the tires to go on sale or have another rebate offer. Thankfully I am not in a rush since the current tires have plenty of life left in them.

Next up: A preliminary plan and goals.

Yesterday on the drive up to Eau Claire I was passed by a couple with a bit more grey hair than us in a red soft top Miata. Top up but with the rear window missing (removed?) and a space saver spare strapped to the top of the trunk. The license plate? Ontario. They looked like they were having a good time.