Riding through Rancho Santa Fe this morning, I came across this trailered treat: 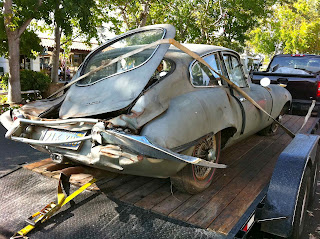 Rancho Santa Fe has been a good area to find interesting cars. This one was parked right around the corner from where I spotted the Z8 a few weeks back. 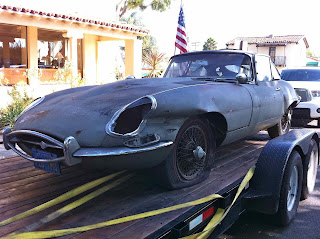 It's a '63 or '64 Jaguar E-Type, an example of what is arguably the most beautiful production car ever made. I spoke with the new owner for a few minutes, he had driven out from Utah to pick up his new purchase. Freshly rescued from a San Diego estate, apparently it hit a guardrail at high speed and spun nearly a quarter century ago. 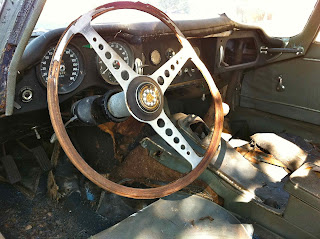 The impact was hard enough that the steering wheel had a sizable bend in it. Whether that was caused by hitting it with driver's chest or if he was straight-armed is unknown. 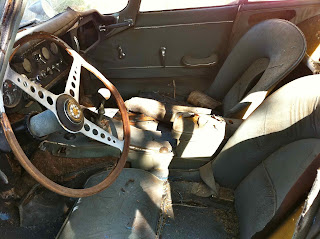 The late owner had intended on restoring it, but apparently he never had the time or funds to do so. Unfortunately he passed at 71 years of age, with the car still wearing the California blue plates that expired in September 1988. The new owner is sharing the bounty with a friend of his who is restoring an E-Type in Riverside. Whatever is left over may become a hot rod on down the line. At least this cat will give many precious bits to get another back on the road. 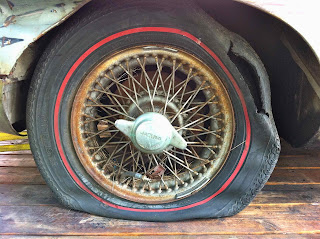 If it was mine - and if someone was covering the costs - I'd rebuild it into a Harold & Maude-style E-Type hearse. 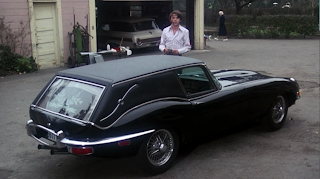 Since this Jaguar will be donating it's silky straight six to the new owner's friend, a new powerplant is in order. And one might as well pop another straight six under the extended bonnet. 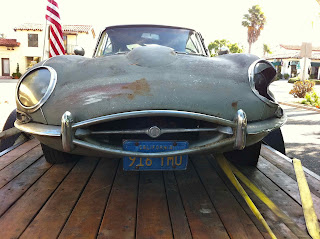 I'm thinking a Cummins 6.7l diesel from a 2009 Dodge Ram. 350 HP and 650 lb-ft of torque from an oil burner will give it some scoot and will properly piss off any Jaguar purist who isn't already mortified by the hearse coachwork.
Posted by Green Laker at 4:15 PM

Plus, with that Cummins, you could tow a big old trailer. Which would look utterly awesome.

So you want to build a replica of the Harold and Maude hearse?

See it at the Jaguar Club's national meet in Scottsdale, Arizona -- first week in April, 2016.