While doing some spring cleaning in our garage attic over the weekend, I unearthed a box containing a few more framed vintage postcards. So without further adieu, here are a couple more from Green Lake's Northern Baptist Assembly (now known as the Green Lake Conference Center).

Like about half of my postcards, these were never sent - so no potentially interesting back story. 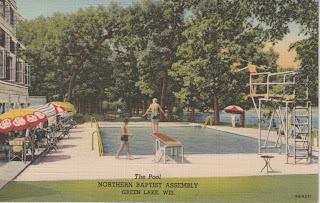 The pool pictured above has been filled in as long as I have been on the planet. It's now a garden with a perfectly-rectangular concrete border. The last time I walked the perimeter, faint "NO RUNNING" painted signs were still visible - barely. I could also find the anchor bolts for the diving boards and egress ladders. I have a series of three very cool real photo black and white postcards with various views of the pool, but they're all secured in one frame that I don't want to dismantle for scanning.

Postcard number two depicts a classic scene at the center. 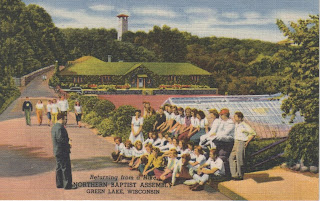 Somewhere in my parent's photo albums, there's a picture of me, at about three years old, running here with my maternal grandmother watching over. At least I think such photo exists.

Both postcards have the same printing on the back: 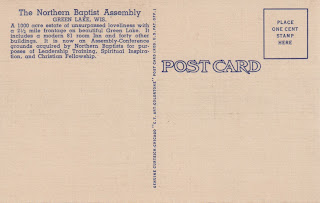 The Northern Baptist Assembly
GREEN LAKE, WIS.
A 1000 acre estate of unsurpassed loveliness with a 2 1/2 mile frontage on beautiful Green Lake. It includes a modern 81 room Inn and forty other buildings. It is no an Assembly-Conference grounds acquired by the Northern Baptists for purposes of Leadership Training, Spiritual Inspiration, and Christian Fellowship.
Posted by Green Laker at 9:34 PM