Goodness Via The USPS 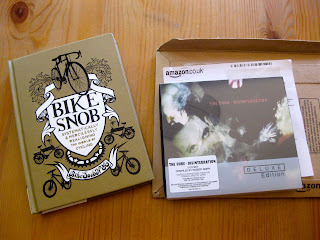 A couple of long-awaited purchases hit the mailbox today. Bike Snob NYC's new book and a fantastic three-CD reissue of The Cure's nearly perfect Disintegration (1989). I can't believe that the last time I saw The Cure live, they were touring for that album way back on August 31st, 1989 at the Rosemont (IL) Horizon. Quite the set list too, see it here.

I'm very anxious to delve into both, but feel that I must honor the late Dennis Hopper this evening with a viewing of Blue Velvet where he played the memorable Frank Booth.

Frank Booth: Hey you wanna go for a ride?

Jeffery Beaumont: No thanks.

Frank Booth: No thanks? What does that mean?

Jeffery Beaumont: For a ride.