Or, rather, down in the strip mall parking lot. What looks to most like a venerable W201 "Baby Benz" is the factory hot rod version, the vaunted 190E 2.3-16. 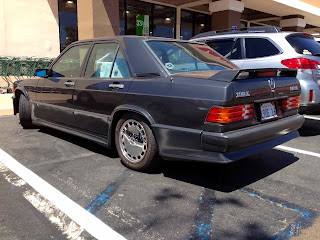 The 190E 2.3-16s were originally designed for the World Rally circuit, but then Audi's formidable quattro shook things up with unmatchable and all-conquering all wheel drive. Knowing that their new platform would be soundly trounced by their rivals in Ingolstadt, Mercedes re-focused their efforts and decided to go after the German Touring Car Championship (DTM) instead. 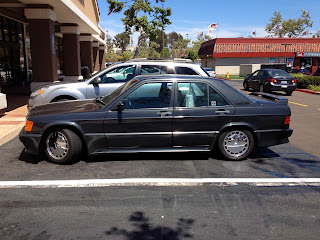 BMW's celebrated E30 M3 was created as a direct response to the 2.3-16 and had much altered bodywork covering the acclaimed S14 four pot.  With the M-B, the cosmetic changes from a standard W201 are subtle. Lower body cladding, a trunk lid spoiler and (possibly) a lower ride height separate this from the lower spec 190s. Under the hood, the 2.3 liter engine received a Cosworth-designed 16 valve alloy head, boosting power by 30-49 HP over the standard engine, depending on the market. The US-spec cars had 167 HP/162 lb-ft of torque, which certainly doesn't sound like much, especially considering that our eight year old Subaru wagon produces essentially the same power. 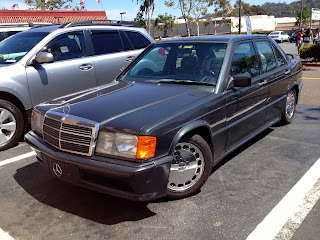 This one is in great shape and nearly perfect to me. I'd just replace the blinged-out chrome-plated alloys with a set sprayed in the correct factory silver. Apparently the owner knows what a special car he/she has by the personalized plate: 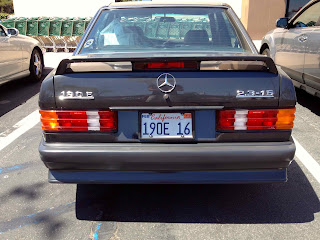 I'd love to have one of these in the garage someday, preferably alongside a Porsche-propelled W124 500E of similar vintage.
Posted by Green Laker at 6:45 AM

Email ThisBlogThis!Share to TwitterShare to FacebookShare to Pinterest
Labels: 190E 2.3-16, cars, Down on the Street, Mercedes Benz

Just like a person, even cars have history. If you read about it, it is very fascinating. Vintage cars are actually amazing. They might not be as smoother to drive than the latest version, but car enthusiasts love collecting them.

Mining Machines Europe believes in maintaining ongoing customer relationships.
Our support does not end at the point of sale. our clients to ensure their Rigs operate at full potential. https://miningmachinesuk.com/
Bitcoin Miner for sale