With 105k miles over the course of 21 years, the Miata's stock shocks were more than tired. Not quite as gone as the ones were on the on the previous red Miata, but bad enough that the car wasn't handling nearly as well as a Miata should.

Looking to make the car's handling a tad more aggressive and the ride firmer, I went to the Flyin' Miata website and ordered up their "Stage 1.5" suspension kit. Consisting of new adjustable Tokico adjustable shock absorbers, custom Flyin' Miata lowering springs, new rear top hats (for increased rear suspension travel) and elastomer bump stops, this kit sounded like exactly what I was looking for. They advertise the kit as having a "killer ride with extra suspension travel in the rear and handling that will handle anything from canyon carving to full-on racetrack use." Yep, sounds great for the relatively-smooth roads in these parts.

I wanted it slightly lower, but not too low that the lower edge of the front bumper would scrape on the driveway... 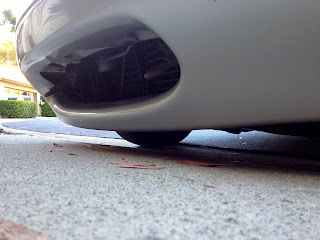 ...or the many speed bumps in our neighborhood.

The original plan was to attempt to install this kit myself, but the more I read about the install, the more I realized that my toolbox (and skill level) was not up to snuff. After asking a few friends, I was directed to a San Diego shop that handled the task for a very reasonable price. 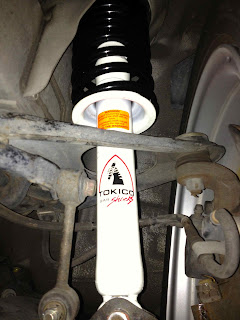 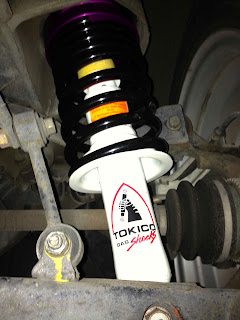 rear, the purple thing is the new travel-increasing top hat

One of the nice things about the shocks is that they are easily tuned. Turning the adjustment screw on the top of each corner affects both the compression and rebound damping. 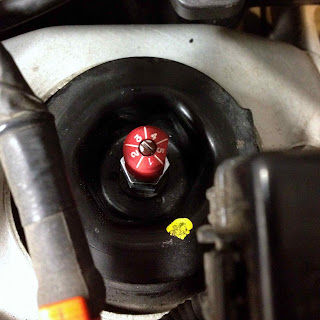 I was a little concerned about the stiffness of the ride on the drive back after picking the car up, but once I popped the hood and trunk, the reason was clear. All four were set at the firmest setting of 5. Dialing back to Flyin' Miata's recommended 3 front and 2 rear yielded fantastic results. The car settles down far quicker after hitting impacts and, most surprisingly, it's far quieter. I didn't realize just how much the noise stock bits were making. Overall it feels like a completely different car. Now I just need to make a run up Palomar Mountain to see how it handles in a more challenging environment.
Posted by Green Laker at 4:00 AM

One of the best firm of Floor Plans Designer Indore

Mining Machines Europe believes in maintaining ongoing customer relationships.
Our support does not end at the point of sale. our clients to ensure their Rigs operate at full potential. https://miningmachinesuk.com/
Bitcoin Miner for sale