Okay, so the red car sold to a woman in her late 30s within a few days of posting it on the local Craigslist. After almost getting into two fender-benders during the 30 minute test drive, I don't have much faith that the poor car is long for this world with her as the owner. She seemed very easily distracted and somewhat of an airhead. Oh well, at least I had the cash in hand - the same amount that I had spent on the car a few months prior. Since she was new to the area and didn't have an easy way to pick up the car (I thought of the Coaster commuter train after the fact), I offered to deliver it to her San Diego apartment for her. Here's the last shot, sitting outside her apartment and sporting the alloy "Daisy" wheels from the silver car: 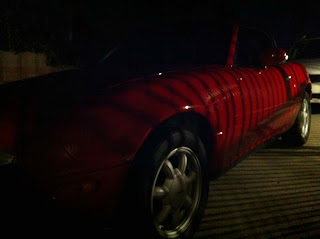 The grrrls drove me back home and I started formulating the plans for my new blank canvas.

Like the project list I made for the red car, I wanted to make the car look better, perform better and enhance safety and comfort. Nothing too flashy or out-of-character for the car, and taking advantage of a deep pool of enthusiast knowledge from these cars being well-loved and modified for the last twenty-plus years.

Engine/Drivetrain
First, to get it to run properly, a new ignition system was ordered. Ignitor/coil, spark plugs and wires to replace the damaged ones.

With almost two year-old oil in the crankcase (the car had set for over a year prior to my purchase), and who knows how old the coolant, brake fluid, trans fluid and diff oil, it's time to flush and refresh the fluids. The clutch pedal has too much "dead travel" before engaging, but three minutes under the dash with 10 and 12mm open-ended wrenches took care of that.

And after crawling around the underside of the car while it was on jackstands, a fair oil leak was discovered. Thankfully it's just from the valve cover gasket, a common failure with these engines and a quick and easy fix.

Chassis
Thankfully the original shocks aren't as bad on the silver car as they were on the red car. And remarkably, the front end sits about 1" lower than that of the red car. Regardless, the shocks are tired and I still plan on making the same upgrades that I had planned for the red car. Flyin' Miata Stage 1.5 suspension kit and related bracing to stiffen up the chassis.

Body
I was fortunate to find a well cared-for and always garaged example in the red car. The silver one is very nice overall, but has some light bodywork to attend to. The goal is to get the car to a similar level as the red car. Clean and straight, but not go so far as to do a full repaint. Repair the rear quarter panel and bumper, re-spray the mirror surrounds, do some paintless dent removal and refinish the front bumper. The faded wiper arms desperately need a fresh coat of paint.

Above and beyond that, the same OEM front air dam, shorty antenna and Hard Dog roll bar that were also planned for the red car.

The trunk had a slight water leak from the optional hardtop attachment points, repaired with $2 worth of Home Depot-sourced o-rings: 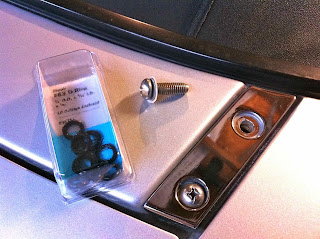 Thankfully I don't have to spring for a new top, the glass window-equipped version is in great shape.

Interior
Since the OEM speakers in the silver car were totally fried, I didn't see it fit to swap them out with the mid-range aftermarket speakers that were in the red car. A new set of door and headrest speakers will be installed. The distance between the brake and gas pedal is slightly wider than that in the red car, and my All-Stars have a hard time matching revs, so a Flyin' Miata pedal kit is on order.


I've already tackled a lot of these projects, I've just been behind (and uninspired) in posting. Stay tuned.
Posted by Green Laker at 8:17 PM

I'm a little sad that the red car didn't end up going to an enthusiast. All that documentation and attention to detail will go for naught.

Keith - yeah, me too. But she was the first one to offer what I wanted to get out of it. A day after I sold it, Nathan from Mazda USA emailed me, asking if I still had it as a friend of his was looking for a clean NA. Oops.

It looks like many people here are looking for the original manufacturers specifications. I wanted to tell everyone about VehicleBios.com. It has free access to all specs for almost every auto and truck ever built! Hope this helps some people. Thank you, Rashida, Ten Doves"

Thank you for the article

Thanks for your info sewa laptop harian pribadi di Pekanbaru