First up, a Renault R4 - the first one of these frogs that I have seen in the flesh. 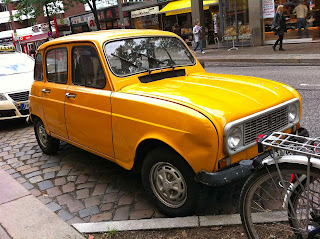 According to the Wikipedia entry, the R4 (or Quattrelle) was Renault's answer to the Citroën 2CV - a basic, efficient front-drive family car. 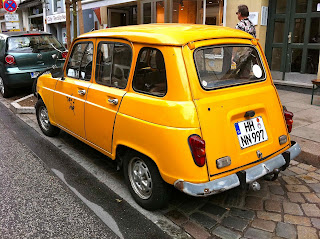 Exposed hinges? Slider windows? Crude styling? Absent of virtually all creature comforts? All of these "attributes" can be found in the R4. Even the idea of interior door panels may have been too deluxe of a feature for the R4: 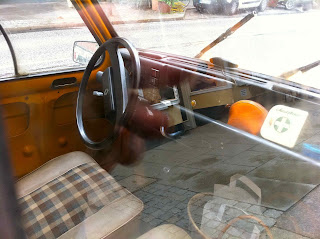 Still, it might be fun to bomb around a European city in. Or better yet, on some unimproved French farm roads. 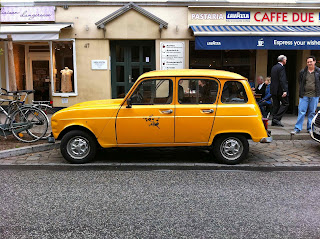 Parked less than a kilometer from the R4, a Citroën 2CV was poking out from a parking spot (next to a neat Euro-market Civic hatch). 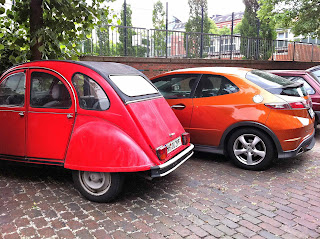 Although far from perfect, it was in much nicer shape than the last 2CV that I spotted in the Oceanside harbor parking lot. 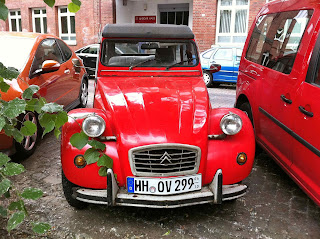 I'm guessing by the more-finished grille treatment that this 2CV is probably decades newer than the yellow beast in Oceanside.

Given my choice between the Renault and Citröen, there's no question that I'd take the latter home with me.
Posted by Green Laker at 5:15 AM

Email ThisBlogThis!Share to TwitterShare to FacebookShare to Pinterest
Labels: cars, Citroën, Down on the Street, Hamburg, R4, Renault